FSUE TSENKI "won a contest held by the Federal Agency for Science and Innovation within the federal target program" Training of scientific and scientific-pedagogical personnel Innovative Russia "for 2009-2013
:: 05.03.2010

In the past year under the patronage of the MES of Russia started the Federal target program "Training of scientific and scientific-pedagogical personnel of innovation of Russia. The program aims to achieve world-class scientific results on a wide range of research and consolidation in the field of science and education, scientific and pedagogical staff, building effective and sustainable research teams, in which young researchers, graduate and undergraduate students work with researchers yield the best results of the older generations.

Research and Education Center (NOTsy) are considered as one of the key infrastructure elements of the program, providing consolidation of scientific and pedagogical staff in the field of science and education. Expected the most effective use of scientific, human resources, a pilot and laboratory facilities in a research and educational purposes. The most important task of the Scientific and Educational Center is to create conditions for development of inner-mobility of scientific and pedagogical staff. The mechanism of consolidation in science through participation in scientific and educational centers, as well as by conducting research and development activities, the program assumes the achievement of young researchers, this level of qualification that allows them to still be competitive in the market research.

Interest Research, which NOC TSENKI participated in the contest is: "Study on ways and means of creating fundamentally new types of high precision gyroscopes on the generalized Sagnac effect (on the de Broglie waves, Bose-Einstein condensates and superfluid helium) and micromachined gyroscopes with increased accuracy spaced frequencies of excitation and removal for control rocket and space technology. "

Gyroscopic effect in optics (the sensitivity of optical ring interferometers for absolute rotation) predicted Oliver Lodge in 1893, but the effect was confirmed experimentally 20 years later Sagnac.

Sagnac effect was used to measure the Earth's rotation, but before the creation of optical gyroscopes on the Sagnac effect, for practical purposes, decades passed - they were manufactured and applied only to the 60-ies of XX century.

At the present time in laboratories the world's leading research centers studied and worked out a fundamentally new generation gyroscopes, using the generalized Sagnac effect is manifested not only in light waves, but in the matter waves (de Broglie waves, particles, atoms and Bose-Einstein condensates), and also in the quantum properties of superfluids.

Despite the apparent even in the wording of the complexity of subjects, scientists, engineers and teachers FSUE TSENKI and MSTU. Bauman is no stranger to find original solutions to the fundamental scientific problems and translate them into "metal" in new models of equipment.

Competition Commission to assess the relevance of tasks and promising ways to address them, the winner of FSUE TSENKI "and selecting each of the participants 15 million rubles. from the federal budget. The winner also became one more venture Space Agency - Federal State Unitary Enterprise NPO im. Lavochkin "

A group of research and education center TSENKI to 2012, using existing in Russia, the scientific advances in the relevant sections of Theoretical and Experimental Physics, the technological level of laser technology, cryogenic technology, micromechanics and nanomechanics of rapidly developing and nanophotonics, to be in this research to assess the feasibility full-scale development of one or more versions of gyroscopes on the generalized Sagnac effect for the military promyshennogo complex, space, missile and related industries. 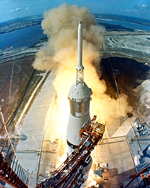