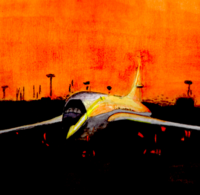 The Q-ball is not unlike a pitot tube on an aircraft that measures airspeed. It consists of eight openings at the top of the Launch Escape Tower. These openings lead to instruments which gauge air pressure. As well as providing dynamic pressure (known as "Q") information during powered flight, they help determine the angle of incidence of the tower during an abort event. The Q-ball design works at almost all air-speeds, unlike the pitot-static instruments used on most aircraft. A similar type of Q-ball was fitted to NASA's hypersonic X-15 research aircraft made, like the CSM, by North American in Downey, California. The Q-ball is covered until shortly before launch, to prevent blockage of the holes