In Russia, have created a humanoid robot, astronaut, capable of working in orbit, according to "Izvestia". As the developers told the publication, SAR-400 full copies of motion of the operator and can autonomously perform fine mechanical work - tighten the screws, to play chess, inspect lining for cracks.
In the next two years will send a robot to the ISS, and in the future - to the moon, Mars and other planets. However, the astronauts are confident that no man is no substitute for a robot.
- The most important human dignity - the ability to know the world around us. And this is no machine will not do, - the cosmonaut Sergey Avdeev.
He noted that the robot will be very useful in space.
- The principal feature of this robot - to manage it, no need to simulate the movement of other mechanisms. It works the same way as people in the same conditions. That is not necessary to calculate the movement - you can just do what you do normally - said Avdeev.
According to the astronaut, in November 2011, when the SAR-400 was tested in the Star City Cosmonaut Training Center, with the help of operators tightened the screws, open hatches ground up Russian ISS module, working with a fitness center "Exit", where the astronauts work out future spacewalk.
At the same time Avdeev found that the ISS for a robot - an intermediate stage:
- There is much more interesting problems than help astronauts on the ISS. So I accept his visit to the station as a test.
Head manned space programs TsNIIMash Roscosmos Oleg Saprykin told "Izvestia" that SAR-400 became the first Russian space robot in the past 20 years.
- The manipulator was made ​​for the "Buran" to station "Mir ". However, neither in space and missed. Since then, no developments were not. This is our first step to a robot-astronaut - said Saprykin.
He added that the ISS have been using robotic devices, but for standard operations involving the movement of goods and cargo. The first humanoid robot - robonavta - delivered to the ISS Americans, but he "lives" in their unit and is not used - after several spacewalks they discovered a problem with the control system.
In addition, the Japanese are going to send to the ISS robot Asimo, which will be designed for communication and psychological relief crew. In addition, the robot for space - Justin - do the Germans.
Head of the Moscow Branch of the Association "Androidnye technology", designed SAR-400 to order Russian Space Agency, Andrei Nosov, told the "News" that the western development of Russia's ability to convey the robot is different human operator does not only the picture and sound, but the whole range of sensations, including tactile.
- There is used special technology, which transmits the pressure from the surface of the gloves to the manipulator. The operator with the help of a robot can literally touch the surface. It's an incredible feeling - said Nosov.
He added that the principle will be used in the study of other planets - the operator with a special vest and wrist manipulator will control the robot, a robot with cameras, microphones and other sensors - to transmit the image to the video goggles, sound - Headphone and tactile sensations - the gloves.
- It is true that we have not yet figured out how to transmit the signal. To the moon light is 5 seconds to Mars - 15 minutes. But we're working on it - added Nosov.
According to him, to work in remote locations, with whom communication is difficult, to be used by the supervisor firmware technology, when the robot is given by the motion vector, or the task, and he decides how to to perform. In addition, the "brains" android Built-in software automatic operation in different modes.

The astronauts tested the anthropomorphic robot
| In the CPC
September 27, 2013

The purpose of the work performed by order of the Central Research Institute of Mechanical Engineering is the study of the possibility of the on-board flight operations using the robot remotely controlled by a human operator in the so-called a copying mode. The principle of control a humanoid robot in a copying mode is based on the repetition of their movements of the human operator, which are set by a special costume that is worn on the person, and transmitted to the robot via a special hardware-software interface. As a result of such management has perspectives of operations in space (or depressurized compartment) astronaut, located in a sealed compartment of the station, or the operator of the Mission Control Center. To achieve such capabilities, it is necessary to create a robot to adapt its characteristics under performed their flight operations.

To reduce the cost of building a robot designed for experimental development of its virtual interactive three-dimensional model. You can use it to work out flight operations without the use of a robot and set reasonable performance requirements generated by the robot. With this purpose, and intervention studies anthropomorphic robot SAR-401 and its interactive virtual three-dimensional model. 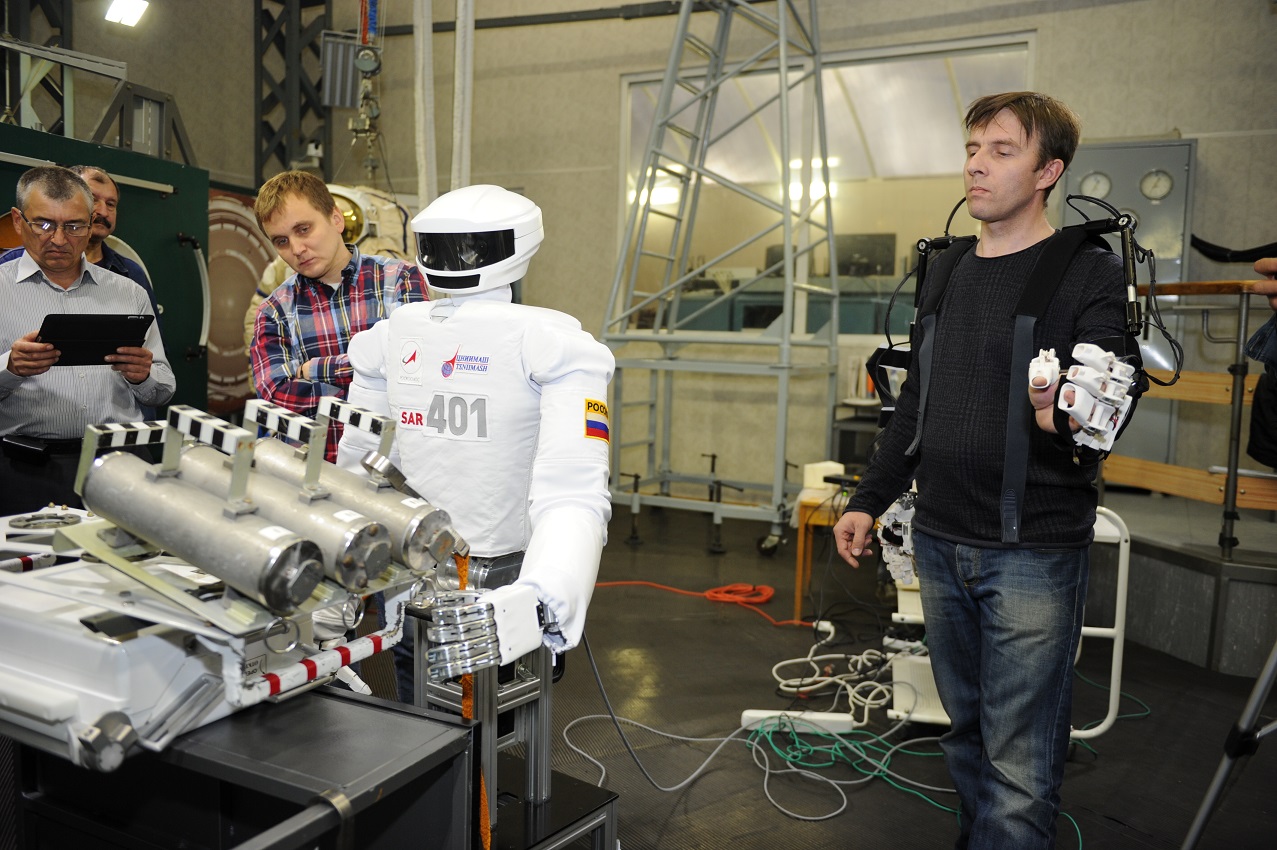 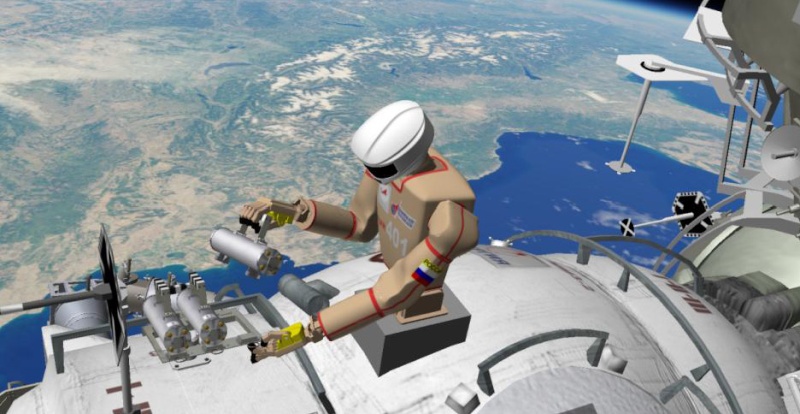