Martian moon 'could be key test'

Martian moon 'could be key test'

Mars' moon Phobos could be the target for a technology trial that would seek to return rock samples to Earth.
A UK team is developing a concept mission that aims to land a spacecraft on the potato-shaped object and grab material off its surface.
These small rock fragments would then be despatched to Earth in a capsule.
"It is being seen as a technological demonstrator for an eventual Mars sample return," said Dr Andrew Ball from the Open University.
Those aspects of the mission that worked well could be incorporated into a full-scale assault on the Red Planet. 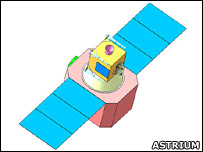 Successful technology from the mission could be taken forward

Both Europe and the US have made the objective of bringing back Martian rocks to Earth laboratories a top priority for their space programmes. A joint venture is likely to occur within the next 15-20 years.
But getting on and off a large planet will be extremely difficult, and the British satellite manufacturer Astrium is proposing to test the required technologies on the low-gravity target of Phobos first.
"It would be a three-year mission. We're looking at a 2016 launch," said Marie-Claire Perkinson, a principal mission systems engineer at the Stevenage company.
Many links
Even so, the Phobos concept has a number of challenging steps, all of them capable of killing the mission if a single element goes wrong.
It is envisaged that a "mothership", powered by an ion engine, would fly into orbit around Mars where it would release a lander craft down on to the surface of the moon.

It's challenging because it requires a lot of new technology development

This robot vehicle might do some in-situ experiments but its main task would be to core, drill, or scoop up surface "soil" into a sealed vessel.
Then, it would lift off from Phobos using chemical thrusters to attempt to dock with, or be captured by, the passing mothership. If that succeeds, the sample vessel would be transferred across and packaged inside an additional bio-secure sealed-container ready for the trip home.
Close to Earth, this capsule would be jettisoned into the atmosphere to make a hard landing; it would need no parachute assistance.
"It's really the sample transfer chain which is the critical issue - right from landing on Phobos and taking the sample, and then passing it through the various vehicles to return to Earth," explained Ms Perkinson.
"It's challenging because it requires a lot of new technology development, and it's reliant on a lot of mechanisms, which is something we usually try to avoid."

(1) The spacecraft could leave in 2016 when Earth and Mars are in a favourable alignment, reducing the mission length to three years
(2) Cruise phase would use a solar-electric engine. This relies on solar power to accelerate xenon ions to produce forward thrust
(3) The mothership would go into orbit around Mars; the lander would be ejected to make its own way down to the surface of Phobos
(4) The lander could do some in-situ experiments, but its primary objective would be to package away surface material
(5) After lift-off, the lander would dock with, or be captured by, the mothership - a key test for Mars sample return technology
(6) The Phobos samples will be transferred to a sealed and bio-secure re-entry capsule for the journey home:
(7) After ejection and Earth re-entry, the capsule would crash-land; no parachute would be used to slow its fall

The concept is being considered by the European Space Agency (Esa) under its Aurora programme for Solar System exploration.
Already approved and in development is a robot rover that will trundle across the surface of the Red Planet to look for signs of past or present life; and Astrium is working on the vehicle's chassis. 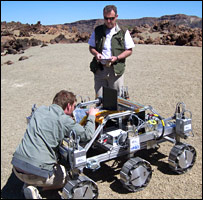 The Aurora programme is committed to a rover project

A precursor Mars-sample-return mission could get the go-ahead from Esa in the next couple of years. French industry is interested in leading this project and is preparing its own, competing concept.
Whoever is chosen may well have to watch the Russians give it a go first. They are currently working on a project known as Phobos-Grunt, which could fly as early as 2009.
But leading out of the box is not a guarantee of success. Getting down on to a small low-gravity body has its own difficulties. The wrong approach could crush landing legs or even result in the vehicle bouncing straight back off into space.
Such problems were amply demonstrated by the recent Japanese attempts to grab samples off the surface of an asteroid.
It is still not clear whether the Hayabusa spacecraft managed to capture any material and the probe's return to Earth is still haunted by uncertainty.
Moon 'death'
For Dr Ball, a consultant on the Astrium proposal, Phobos represents a fascinating subject for study in its own right, over and above any eventual objective of getting down to the surface of the Red Planet.
The moon, like its sister Deimos, is asteroid-like in appearance - in fact, these two satellites are very probably "primitive" asteroids that were captured into Mars' orbit by its gravity. 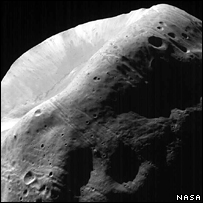 As such, their construction and composition may have much to say about the formation and early evolution of the Solar System.
Close study should also refine estimates for the expected "death" of Phobos. Its orbit around Mars is shrinking and in a few tens of millions of years it will either fall on to the planet or, more likely, shatter under tidal forces into countless pieces and form a ring.
One of the moon's most notable features is the system of grooves that cross its surface. These are assumed to be the result of collisions with rocks blasted off the surface of Mars by space impacts.
This raises the intriguing prospect that Phobos may actually be littered with Martian material.
"So, with this mission, you could get two for one," said Dr Ball.
"When there's a large impact on Mars, ejecta gets thrown up, and some of that can hit Phobos. Over billions of years, Phobos should have accumulated some fraction of Martian soil in its surface.
"In doing this mission, we'd not only be demonstrating many of the technologies required for a Mars sample return, but we may even get some Martian material itself."
The size of the Phobos sample would not need to be very large.
Some 200g would be enough to keep current astro-labs busy and have a portion in reserve for future analysis using yet-to-be developed techniques - a standard approach when dealing with scarce extra-terrestrial material.