A detailed image of the planned landing site of the UK-led Beagle Mars probe has found no sign of any wreckage.
Nasa's new Red Planet orbiter used its advanced camera to photograph a crater on Isidis Planitia, a flattish basin where Beagle was targeted to put down.

It was thought the British-built robot could have smashed into the crater after its parachute system opened too late to slow its descent in 2003.

But there is no sign of Beagle in the Mars Reconnaissance Orbiter picture.


Beagle 2 was designed to seek out signs of life on Mars
When it failed to make contact with Earth, researchers began an extensive search, including a photographic survey.

Previous images taken by another of the US space agency's orbiting craft - the Mars Global Surveyor (MGS) - had shown up an interesting crater in the centre of the landing zone.

One theory held that Beagle could have survived the dangers of descent only to experience the misfortune of rolling into the deep bowl. With dark shadows cast across its solar panels, it may then have struggled to power up its systems and subsequently died.

But the Mars Reconnaissance Orbiter has a remarkable new camera onboard. The High Resolution Imaging Science Experiment (HiRise) system produces pictures that show detail beyond the capability of the MGS.

And the new image of the H20 crater, as it is known, does not show any features consistent with wreckage, let alone an intact Beagle.

Commenting on the latest image Professor Colin Pillinger, of the Open University and lead scientist for Beagle 2, said: "Of course this is disappointing. We had hoped that the HiRISE camera would clarify the oddities we had seen in the crater, but this is not the case.

"Nevertheless, I am extremely grateful to the camera team at Nasa's Jet Propulsion Laboratory and the University of Arizona for trying, and congratulate them on the exceptional quality of the images. I remain optimistic that future images may yet show us where Beagle 2 finally came to rest."

The robotic laboratory was designed to search Mars for signs of past or present life. The last contact was an image of Beagle taken by its "mothership", the Mars Express orbiter, as it was despatched towards the Red Planet on 19 December 2003.


What happened to Beagle 2 as it headed to Mars?


How far Beagle got in its mission is unclear.

The most widely held explanation for its disappearance is that it crashed and was destroyed.

It has been suggested the atmosphere it encountered during its descent on 25 December was thinner than expected having been heated by dust storms on the planet.

This would have meant Beagle entering too fast; its parachute and airbags would have deployed too late. Beagle would have hit the surface at a catastrophic speed; but where its wreckage lies remains a mystery. 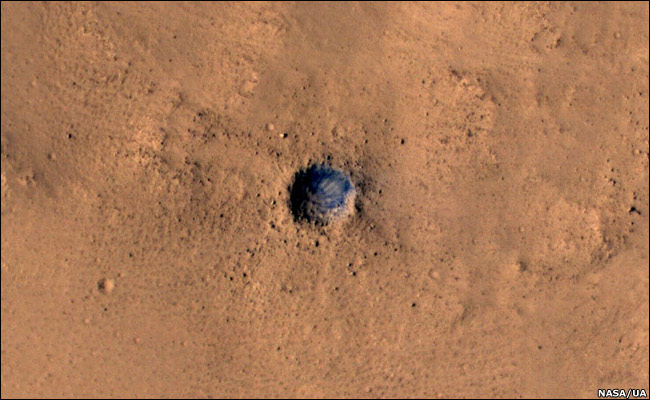