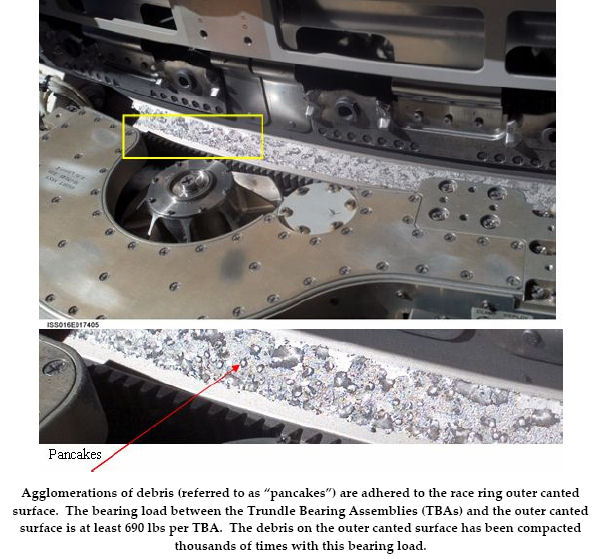 The left-side SARJ is operating normally, but Fossum spotted buildups of grease during an inspection Thursday. Photographs also indicted small amounts of an unknown material dusting the outer edge of the 10-foot-wide drive gear.

Engineers believe the grease may be coming from one or more of the trundle bearings the gear rolls through and it may be beneficial in slowing or preventing the sort of surface breakdown that has damaged the right-side gear. In any case, the grease is not thought to be an issue.

The dust-like material was somewhat of a surprise, Fossum said, but it is nothing like the damage and debris seen in the right-side SARJ.

NASA managers are considering a plan for the crew of the next space station assembly mission, scheduled for launch around Nov. 10, to clean up and lubricate a damaged, debris covered solar array drive gear and to replace 12 bearing assemblies in a bid to use the mechanism as long as possible before switching to a backup gear, an official said today.

Kenny Todd, space station integration and operations manager at the Johnson Space Center, said the replacement of a single bearing during the shuttle Discovery's mission, along with a spacewalk cleaning test, is giving engineers confidence about attempting a near-term repair.

"That will hopefully allow the joint to rotate a little more smoothly and cut down on the amount of vibration we're seeing," Todd said. "At this point, we're targeting the ULF-2 (mission) timeframe to go out and do something proactively with the starboard SARJ."

The space station is equipped with two motor-drive 10-foot-wide solar alpha rotary joints, one on either side of the lab's main power truss, that are designed to rotate outboard solar arrays like giant paddle wheels to track the sun. The devices are crucial for maximizing the electricity the station's solar panels can generate.

The left-side SARJ is operating normally, but last summer engineers began noticing higher-than-usual vibration levels in the right-side SARJ mechanism, along with electrical current spikes indicative of increased friction as the gear rolled through 12 trundle bearing assemblies. During a subsequent spacewalk inspection, astronauts discovered extensive metallic contamination covering the active drive gear and degradation, or erosion, of at least one of the gear's bearing surfaces.

Despite extensive troubleshooting, engineers still don't know what might be causing the damage. One possibility is a small crack or breakdown in the hardened bearing surface that produced debris that was then crushed as it passed through the trundle bearings, causing more damage and creating more debris. Whatever the cause, it is a serious problem and flight controllers no longer operate the right-side SARJ in "auto-track" mode.

"Our thinking right now on the starboard SARJ is that in the ULF-2 timeframe, we will go out and most likely replace the trundle bearings," Todd said. "We did do that on one of the EVAs on this flight, we went in and installed a TBA so obviously, that helps us get more comfortable with that particular operation. Our thought right now is to go out and install the new TBAs during that flight. Prior to installing those TBAs, our thought is to do what we call lubing of the ring."

A cleaned and lubricated drive gear, along with new trundle bearing assemblies, may reduce vibration levels to the point where near-normal operation is possible. NASA managers still believe they ultimately will be forced to switch over to the SARJ's undamaged backup drive gear, but they don't want to take that step until there is no other choice.

"Every piece of hardware we can get down on the ground related to this anomaly gives us additional insight," Todd said. "Getting these TBAs on the ground will allow us to inspect the bearings within them and try to understand the makeup of any residue on the bearings, how are the bearings themselves fairing, are they coming apart, are there any cracks in them, is there anything there that gives us cause for concern?

"So our thought is, let's go replace all the bearings, get those down, do the investigation on them, see what that rolls into in terms of our fault tree. As far as lubing the ring itself, the existing ring, we did a detailed test objective on this flight that had us go out and take a small portion of the ring and do a wipe of it with some lubricant to see how successful we would be in trying to get some of the residue off the ring and get us in a position maybe to try to continue to use that ring with some additional lubrication. The crew gave us some very good anecdotal-type feedback."

As far as ultimately switching to the backup drive gear, "that's something we're looking at downstream," Todd said.

The Discovery astronauts undocked from the space station earlier today and spent the afternoon carrying out a detailed inspection of the shuttle's reinforced carbon carbon nose cap and wing leading edge panels. Lead Flight Director Matt Abbott said no obvious damage could be seen during the initial stages of the inspection, but it will take engineers a full day or so to evaluate the data.

"The survey started right on time," he said. "We'll be taking all the data down from those surveys and inspections and the teams are already starting to look at them, of course. They'll look at those through the night and into the morning. We expect to have some early word mid morning tomorrow before the Mission Management Team meets tomorrow afternoon. We're looking forward to some good results there from the surveys."