MISSION CONTROL, April 10 (RIA Novosti) - The construction of the Russian segment for the International Space Station will be delayed for five years due to insufficient funding, the head of Russia's space rocket corporation said on Thursday.

"We should have completed construction by 2010, but unfortunately we will only manage it by 2015," Energia President Vitaly Lopota said.

He said as a result Russia will request that foreign partners extend the life span of the ISS by five years to 2020. etc etc


MOSCOW, April 11 (RIA Novosti) - Russia will need an additional $5 billion to finish the construction of its segment of the International Space Station (ISS) by 2015, the head of Russia's rocket and space corporation Energia said Friday.

The ISS is a joint project of space agencies from the United States, Russia, Europe, Canada and Japan. The orbital station is likely to remain operational until 2020.

"So far, we have allocated about $4.2 billion for the ISS project, but we will need an additional $5 billion to finish the construction [of the Russian segment] by 2015," Energia President Vitaly Lopota said at a conference dedicated to Cosmonautics Day, celebrated in Russia on April 12.

The first ISS element, the Russian Zarya module, was put into orbit in November 1998. Several modules have been attached to the structure since then, but ongoing construction has missed the initial deadline, largely due to delays in U.S. shuttle launches and a lack of financing.

The Russian segment of the orbital station should have 10 modules by 2015, the Energia official said.

patchfree a écrit:The Russian segment of the orbital station should have 10 modules by 2015, the Energia official said.


MOSCOW, April 11 (RIA Novosti) - Russia will need an additional $5 billion to finish the construction of its segment of the International Space Station (ISS) by 2015, the head of Russia's rocket and space corporation Energia said Friday.

The additional ISS modules were announced by FSA chief Anatoly Perminov at a heads of agency meeting in Paris on 17 July. NASA's Space Shuttle launch manifest details three modules. The Mini Research Module 2 (MRM2), being delivered by a Russian launcher in 2009, the MRM1 that is installed by NASA's Space Shuttle Discovery's crew on mission STS-132 in 2010 and a Proton rocket-delivered multipurpose laboratory module targeted for 2011. The Shuttle mission STS-132 is described as a contingency, but NASA has recently said that it will fly both its contingency missions, STS-132 and STS-133.

The 17 July meeting's joint statement referred to Russian modules being provided in 2009 and 2010. Perminov went further, saying: "Before 2011 we will be launching two small research modules. If a decision is made to continue working with the station after 2015 then the Russian segment will be completed with further modules - energy modules, research modules etc." Program for Development of the Russian ISS Segment

ISS construction is at last entering its final stage. Recently European “Columbus” module was added to the station followed by Japanese “Kibo” module. At the end of 2009 shuttle will deliver to ISS the last elements of the American segment – Node 3 and “Cupola”. As a result of these activities, Russian ISS partners (USA, Canada, ESA and Japan) starting from 2010 will have a complete segment and would be able to start its full scale utilization, doing science and research for their respective national space agencies.

And what is happening with our Russian segment (RS)? At the moment it consists of 3 modules: FGB “Zarya”, SM “Zvezda” and docking compartment “Pirs”. And FGB “Zarya” legally belongs to USA, since it is built under contract paid by Americans. It is considered part of the RS only because it is managed by MCC-M and serviced mainly by Russian cosmonauts. In accordance to Vitaly Lopota, President of RKK “Energia”, Federal Space Program initially envisaged 10 Russian modules at ISS by 2010, but due to underfinacing construction of RS is delayed. Production and launches of modules have been moved to the right for the indefinite period of time. Therefore RKK “Energia”, being responsible for development and operation of RS, prepared an updated program of development of ISS RS. It is now planned to launch 6 new modules for the RS during 2009-2015 in the following order:

Mini Research Module -2 – Docking Compartment -2, MRM-2 – DC2 (malii issledovatelskiy modul 2 – stykovochny otsek 2, МИМ2-СО2) will be used to create the fourth docking port at ISS for Soyuz and Progress ships and enable fuel transfer to ISS. Such additional docking compartment is required to increase ISS crew to 6 persons, since constant presence of 2 Soyuz ships at the station is required in this case. Also this module could be used for EVAs.
Main technical specifications of the module: mass – 4000 kg, diameter – 2.6 m, length – 4.6 m, pressurized volume – 12.5 m3, cargo weight to be delivered inside the module – 1000 kg, storage volume inside the module - 2.5 m3, one workplace for the scientific equipment on an external surface of the module. Launch of the module is planned for August 2009 by Soyuz-FG rocket. It would be delivered to ISS with the help of special cargo ship Progress M – CO2 (#302, mass at launch 7290 kg) and would be docked to zenith port of “Zvezda” SM.

Mini Research Module – 1- Docking and Cargo Module, MRM-1 - DCM (Maliy issledovatelskiy modul-1 – stykovochno-gruzovoi modul, МИМ1-СГМ) will be used to ensure operations of Soyuz and Progress, as well as to deliver various cargo to ISS. This module is constructed under contract with NASA, its full description is in Novosti Kosmonavtiki, issue # 6 for 2007, pages 20-21.
Main technical specifications of the module: mass at start – 7900 kg, diameter – 2.4 m, length – 6.55 m, pressurized volume – 18 m3, pressurized storage volume inside the module - 5 m3, one workplace for the scientific equipment on an external surface of the module. The following cargo would be delivered at the exterior of the module: MLM airlock, MLM radiator, spare elbow joint for European Manipulator Arm (ERA) and transferable workplace with ERA mounting platform. All those elements would be transferred to MLM in the future.
MRM-1 – DCM launch is planned for March 2010 at STS-132/ISS-ULF4. Module would be installed at the nadir port of FGB “Zarya”.

Multipurpose Laboratory Module, MLM (mnogotselevoy laboratorniy modul (МЛМ) would be the main functional element of ISS RS which would ensure scientific utilization of RS (SM, FGB and Pirs are used primarily for ISS maintenance). MLM is created as multi-purpose scientific laboratory, which would be capable of handling rotating science payloads under Russian and foreign science programs. MLM inclusion in the RS will allow to significantly increase RS scientific capacity for fundamental and applied research projects. Module would be equipped with 12 external workplaces and several internal unified workplaces, as well as with vibration-protected workplaces, thermostatic equipment, manipulator and automated airlock.
Main technical specifications of the module: mass – 20700 kg, diameter – 4.1 m, length – 13.2 m, pressurized volume – 70 m3, pressurized storage volume inside the module - up to 8 m3, power available for scientific experiments – up to 2.5 kW. It is expected that MLM will be launched in 2011 by Proton-M rocket. It will then use its own engines to fly to ISS and would be docked to the nadir docking port at SM “Zvezda”. Docking Compartment - 1 is located at this port at the moment and therefore before MLM launch DC-1 would be undocked with the help of Progress ship and then deorbited.

Node module, NM (uzlovoy modul (УМ) is required to integrate in RS two science power modules and provide additional docking ports. Main technical specifications of the module: mass – 4000 kg, pressurized volume – 14 m3, docking ports available – 5. Launch of the module is planned for 2013 by Soyuz rocket. It would be delivered to ISS with the help of special cargo ship Progress M – УМ (#303) and would be docked to MLM.

Science Power Module, SPM (nauchno-energeticheskiy modul (НЭМ) is required to ensure independent power supply to ISS. Main technical specifications of the module: mass – 20000 kg, diameter – 4.1 m, length – 25.3 m, dimensions with the fully deployed solar arrays and radiator - 26.5х25.3х10.5 m, pressurized volume – up to 150 m3, pressurized volume for scientific equipment - 12 m3, solar arrays power capacity – 36 kW, 12 workplaces. In accordance with agreement with NASA RS is partially supplied with power from American segment but this is possible only till 2015. For further RS operations it should have its own power system, and it is envisaged to have 2 similar modules for this purpose - SPM-1 in 2014 and SPM-2 in 2015. They would be launched by Proton-M rockets and would be docked to port and aft docking ports of the NM.

Therefore, by 2015 the ISS RS will include 8 modules: FGB “Zarya”, SM “Zvezda”, MLM, MRM-1-CDM, MRM-2-DC2, NM, SPM-1 and SPM-2. RS total mass would be 122 tones, pressurized volume – up to 400 m3, power capacity – 80 kW.
Such projected configuration of the ISS RS allows, if required, to start independent flight of the RS as a separate Russian orbital station.
Full scale deployment of RS will allow Russian continuous presence in space, will provide an opportunity for fundamental scientific research, will give a chance for development of unique new materials, and will provide an opportunity for additional commercial services in space. In a longer term perspective ISS RS could be used for development, assembly and maintenance of the lunar and interplanetary flights.
ISS RS development program is approved by the Scientific and Technical Council of RKK “Energia” and Roskosmos management. It should now get the endorsement of the Russian government and receive full financing. Only in this case the full-scale ISS RS could be completed.

A view of the assembled Segment:

Description of the new modules: 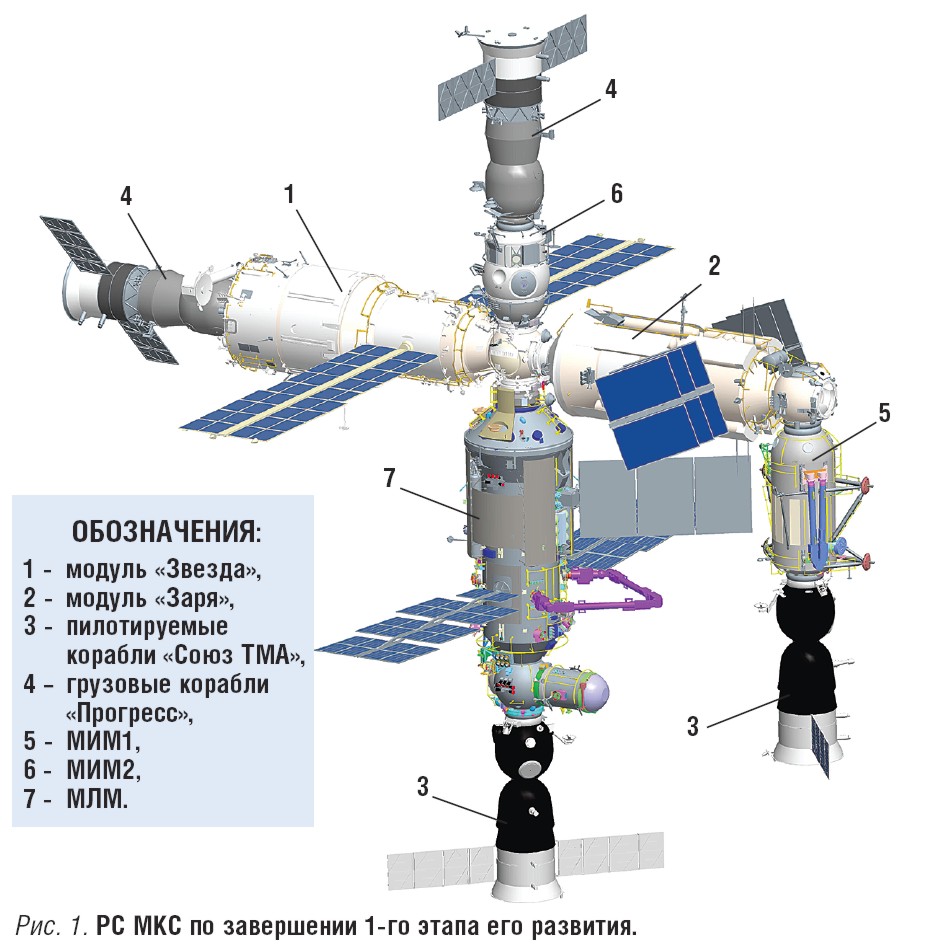 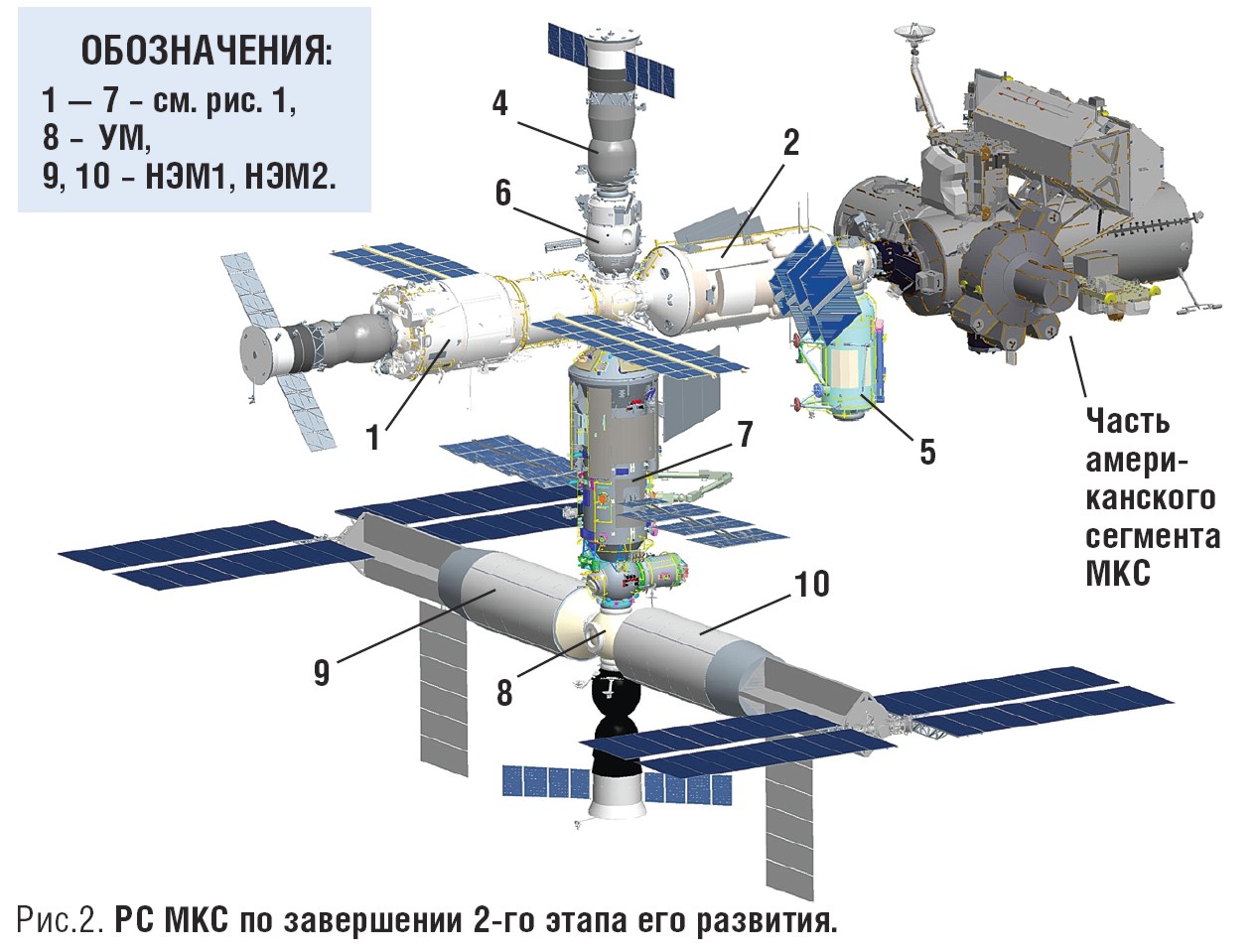 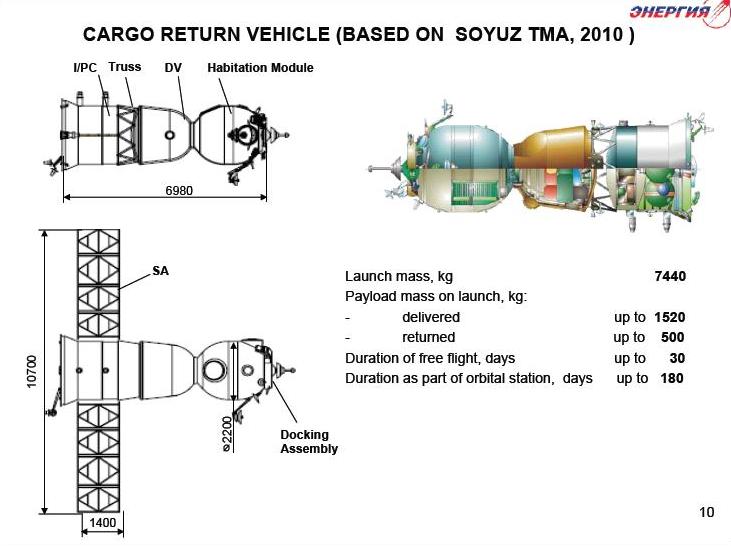