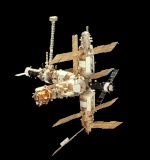 We pack medications for crewmembers on both the Shuttle and ISS,” she said. “These medications include simple things like painkillers and decongestants and eyedrops, and things like that. We also have [an] emergency medical kit, which has…a selection of emergency medications like epinephrine and things like that.”
Dr. Putcha explained that while in space, astronauts have access to general care medications, such as burn ointments and skin irritant sprays. For emergency situations, the medical kit is also stocked with a broad spectrum of antibiotics, among other drugs, in case of an upper respiratory tract infection or gastrointestinal infection.
To date, there have not been any major health issues for NASA astronauts in space, Dr. Putcha said. However, just the same as the average individual on earth, astronauts do have their share of aches and pains.