Des news officielles, en rapport avec l'image de la surface blanche sous le lander :
http://phoenix.lpl.arizona.edu/05_31_pr.php
May 31, 2008 -- TUCSON, Ariz.-- A view of the ground underneath NASA's Phoenix Mars Lander adds to evidence that descent thrusters dispersed overlying soil and exposed a harder substrate that may be ice.
The image received Friday night from the spacecraft's Robotic Arm Camera shows patches of smooth and level surfaces beneath the thrusters.
"This suggests we have an ice table under a thin layer of loose soil," said the lead scientist for the Robotic Arm Camera, Horst Uwe Keller of Max Planck Institute for Solar System Research, Katlenburg-Lindau, Germany.
"We were expecting to find ice within two to six inches of the surface," said Peter Smith of the University of Arizona, Tucson, principal investigator for Phoenix. "The thrusters have excavated two to six inches and, sure enough, we see something that looks like ice. It's not impossible that it's something else, but our leading interpretation is ice." 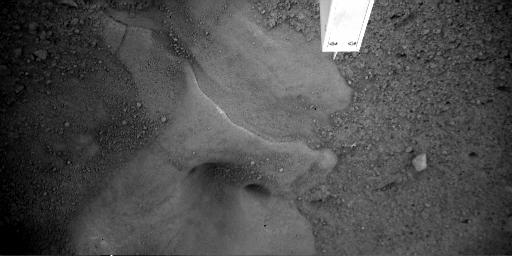