With the concept of the future Russian-European transport spacecraft finally decided, potential partners plan to work out technical details.

Representatives of the European space industry are preparing to travel to Moscow in the middle of this month, to discuss the Advanced Crew Transportation System, or ACTS. Space officials from Europe and Russia agreed on the format of the meeting at the end of May, during ILA-2008 air and space show in Berlin.

European Space Agency, ESA, has exactly six months before a crucial conference of ministers in November 2008, which will allocate money for space for the next three years. Traditionally, manned space flight has been only a small portion of the ESA budget, and politicians would have to be convinced in the feasibility of any manned venture before committing their countries and their budgets to it. Equally important would be a reliable financial and political support of the ACTS project in Russia.

"When I look at discussions at ESA, my feeling is that ESA is strongly inclined... to make (ACTS) happen, to make it possible and I think it is very good approach," said Cristian Bank, Head of ISS Extensions at EADS Space Transportation, Europe's prime contractor in manned space flight.

On May 13, 2008, after months of difficult negotiations, Roskosmos announced that a general agreement on the design of the craft and responsibilities of two sides was achieved. Although ESA has not issued a simultaneous statement, European officials concurred with the Russian announcement. "This is a reference for the two space agencies, so we take it very seriously," Bank said, "We feel very positive about this... this is very ambitious program and if Europe and Russia can agree on this cooperation, I think this is a best thing we can have."

European officials clarified that although they agreed to conduct the final integration of the ACTS spacecraft in Russia, some operational missions of the vehicle might be conducted specifically by ESA, in which case, the assembly would take place in Europe. "...But, I think for the development phase, Russia has big experience (in building the spacecraft) and it makes sense to streamline the project to achieve that goal," Bank said.

Refining the design: the crew capsule

With a general agreement in place, many technical and programmatic details of the venture remained to be tackled. Both sides agreed that the crew module of the spacecraft would be a cone with the opening angle of 20 degrees.

The "magic number" of 20 degrees was once chosen for the Viking crew capsule, one of Europe’s several stillborn projects of the manned space vehicles in the 1990s. The same 20-degree angle of the capsule was retained yet again in European industry’s proposal for a three-seat vehicle, which could be built independently by ESA, in case the more ambitious Russian-European project does not materialize. However, the 20-degree cone is much sharper and steeper than the shape chosen by NASA for its Orion lunar vehicle. The latter is apparently better optimized for the return to Earth from lunar trajectories, however loses out to the Russian-European configuration in the available internal volume. Russian and European engineers will now have to go through a complicated process of choosing and arranging internal systems inside the capsule.

It was also agreed that the ACTS spacecraft would accommodate six people for the missions in the Earth orbit and could carry four people to the orbit around the Moon. Beyond these basics parameters, engineers are yet to decide on many aspects of the design, for example, to what extent to make the crew capsule and its systems reusable after each mission. According to Igor Khamits, the head of development division for manned spacecraft complexes at RKK Energia, a primary Russian contractor in the ACTS project, engineers hope that the crew capsule could be reused for at least 10 missions. To achieve this, developers will have to do away with a traditional ablative thermal protection system, which burns up layer by layer as the reentry capsule streaks through the atmosphere on its way to Earth. Instead, Russian engineers looked at more advanced solutions, such as reusable tiles. Given international nature of the ACTS project, RKK Energia did not shy away from seeking potential subcontractors outside Russia. During ILA-2008 air and space show in Berlin, Russian engineers considered products of Germany-based MT Aerospace, which has experience in development of thermal protection components for rocketry.

Refining the design: the service module

Both sides also agreed that the second module of the ACTS spacecraft would be the European-built service module, containing the propulsion system.

In the early planning of the ACTS project, it was assumed that the service module would derive from the design of the European ATV spacecraft. However, Russian space officials warn not to expect a carbon copy of the ATV service module to be integrated into the ATV design. "We will have tough conditions on mass characteristics and the available volume for all systems," Khamits says, "when we lay out our limitations before our European colleagues, we shall see how much of the existing ATV design could be directly inherited by the ACTS spacecraft." Although Russian engineers fully appreciate the sophistication of the ATV systems, they often perceive the ship’s general layout as overly generous and oversized. In one example, Russian engineers quoted a possibility of "repackaging" ATV’s propellant tanks to save room and mass.

Given the capabilities of the mighty Ariane-5 rocket, which launches the ATV, the mass and volume factors have not been as critical in the design. In the meantime, Russian engineers traditionally worked with very tight mass limitations and likely to face them again in the ACTS project. Although Russian space agency quoted 18-20 tons for the total mass of the ACTS spacecraft, RKK Energia engineers estimated that they could "diet down" the vehicle to as low as 12 tons, leaving eight tons for the six-seat crew capsule. In the meantime, European officials saw 16 tons as the lowest mass for the future spacecraft, perhaps reflecting a very raw state of the project.

If RKK Energia's weight reduction effort proves realistic, it would bring the ACTS spacecraft within the launch capabilities of the existing Zenit rocket, or a similar yet-to-be-built vehicle. After the disintegration of the USSR in 1991, Russian officials shunned the Ukrainian-built Zenit as a "foreign" launch vehicle. Still, RKK Energia have longed eyed the rocket for its next-generation spacecraft. Back in the 1980s, the company relied on Zenit in the first fruitless attempt to replace the Soyuz with the reusable Zarya spacecraft. In the first decade of the 21st century, RKK Energia again favored Zenit as the launcher for the Kliper orbiter. Given the international nature of the ACTS project, the Zenit could become attractive to developers once again.

Still, the official position of the Russian government calls for the development of a brand-new launcher and a launch facility for the manned space flight in Vostochny. European officials did endorse this decision as well. "This cooperation agreement based on the understanding that there will be a new manned launcher... with the higher launch capacity then current Soyuz (rocket) and that requires a new launch pad..," Bank said.

Although recent discussions between Europe and Russia were focused exclusively on the spacecraft capable of reaching lunar orbit, the ultimate goal of the program remains a "transport system" to the lunar surface. To that end, Russian and European officials provided only hints on a possible direction of their future efforts. Both sides agreed that the development of a brand-new heavy-lifting launch vehicle would be required to limit the number of launches for each expedition to the Moon to only two. Previously voiced plans by RKK Energia envisioning up to seven launches of medium-lift rockets to enable a single expedition to the Moon were shelved as unfeasible. According to the sources within the industry, long-term plans for the construction of Russia's new spaceport in the Far East include facilities for both medium-size and heavy-lift rockets.
Still, Russians space officials asked not to expect an exact mirror of flight profile and lifting capabilities proposed by NASA for its current effort to return astronauts to the Moon. Russians indicated that lunar landing could be achieved with lighter, cheaper rockets than those developed for the American program. Partners apparently also remained undecided whether to conduct a rendezvous between the transport ship and the lander in the Earth orbit or in the lunar orbit. 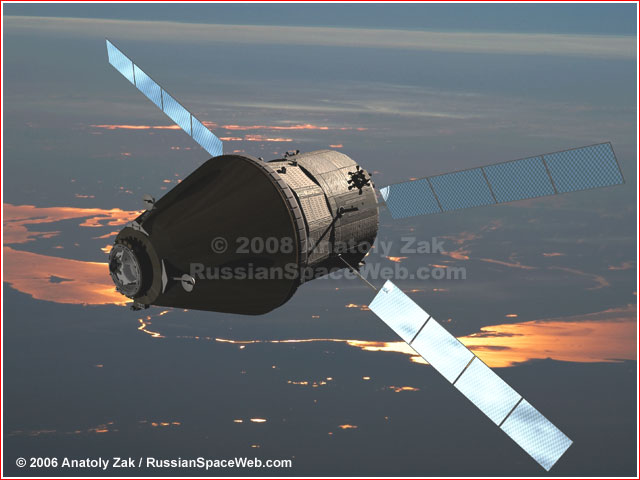 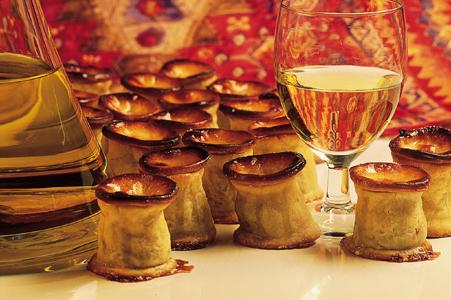 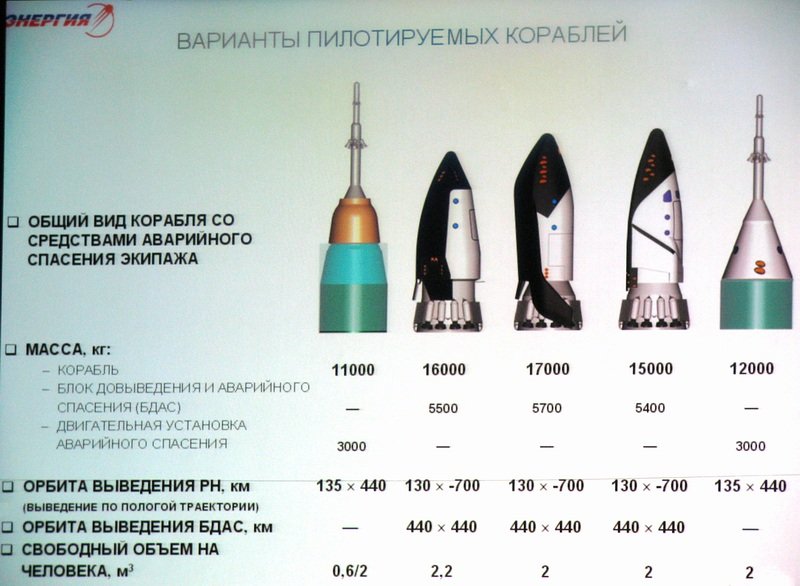 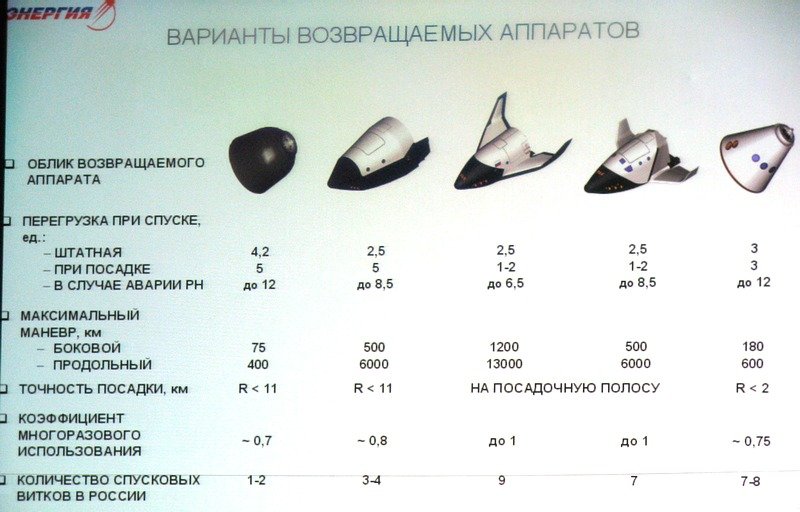 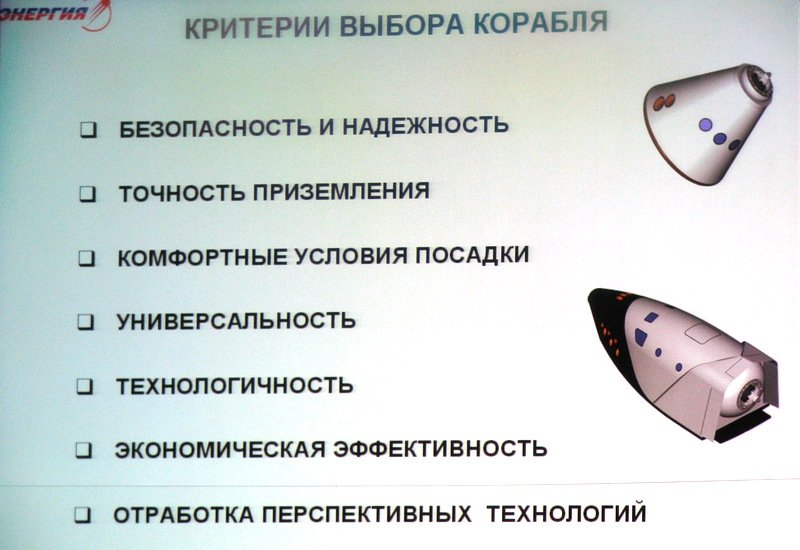 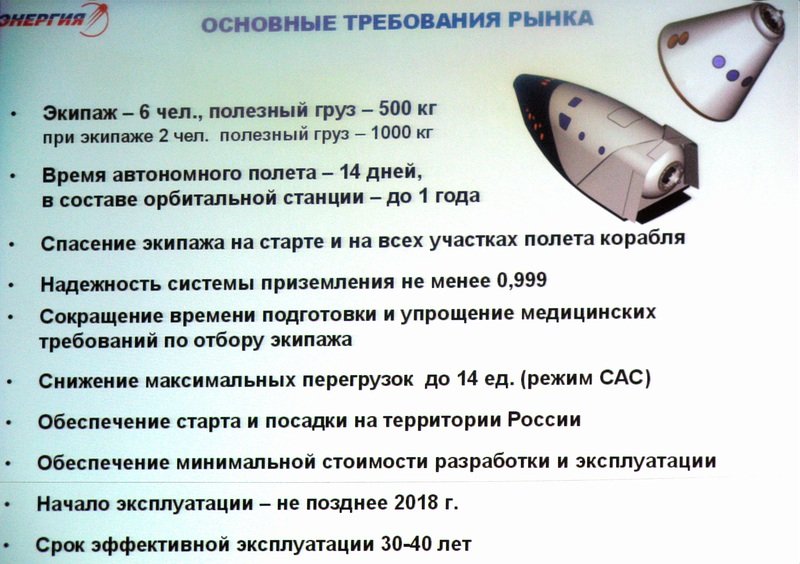 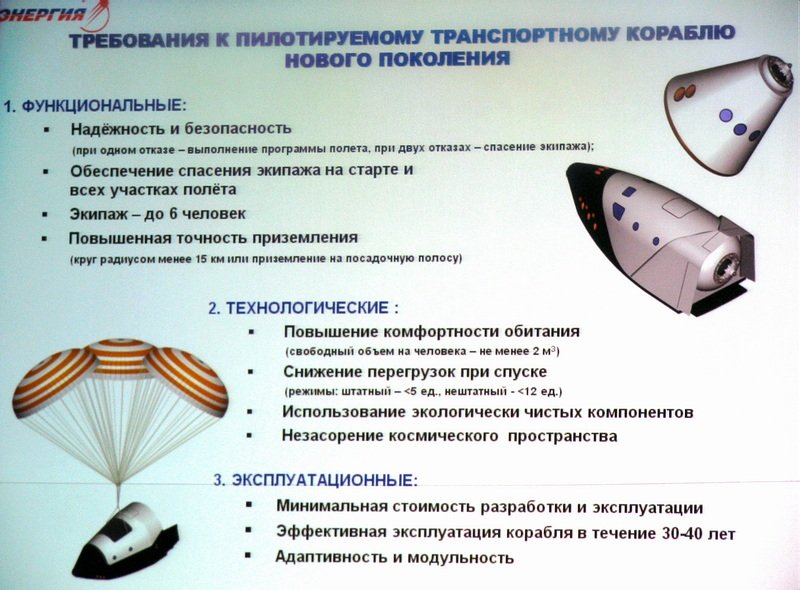 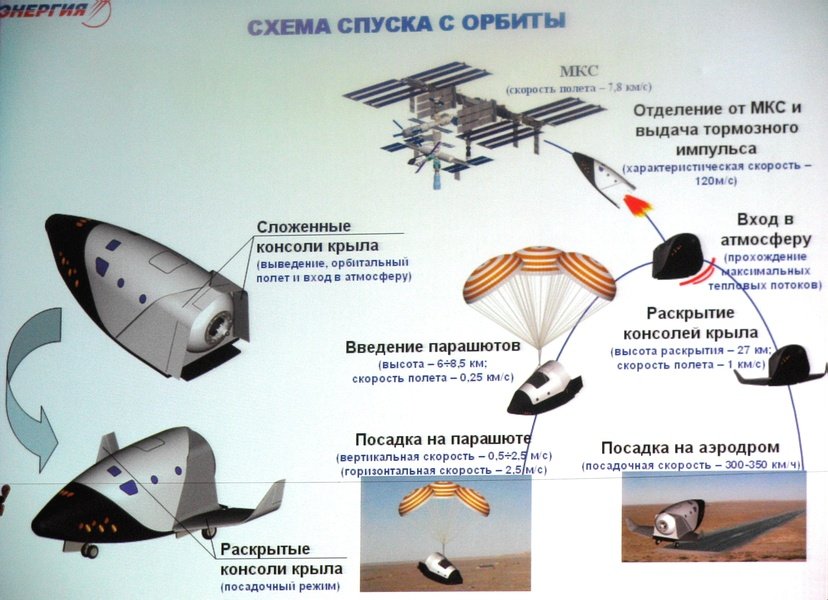 However, the 20-degree cone is much sharper and steeper than the shape chosen by NASA for its Orion lunar vehicle. The latter is apparently better optimized for the return to Earth from lunar trajectories,