- However, this objective has not been accomplished yet. You, young specialists, have to fulfill grand projects in the future, such as missions to the Moon and Mars, development of space-provided power supply of the Earth, other important scientific projects. Roscosmos will always support accomplishment of these objectives, stated Mr. Perminov.

- You will visit Korolev RSC-Energia, Gagarin Cosmonaut Training Center, Zvezda R&D, Space Technique Lab in Bauman University, etc. You will have the opportunity to talk to the crew onboard the International Space Station. Some Russian universities are involved in spacecraft development. Roscosmos supports work of the students in this branch. RF-amateur, scientific and research satellites have been developed. Currently, Yubileiny satellite is in operation. It is controlled by some Russian universities, and Bauman University is in the first place here, Roscosmos Head continued.

Space science schools have been organized by Bauman State Technical University, Moscow Aviation Institute, Lomonosov Moscow State University. Most young specialists working at Roscosmos companies and scientific institutes graduated from these universities. We are very glad that young generation is coming to replace veterans… It is well known that 90 percents of serious scientific discoveries are made by young people of age up to 35. Then, they gain experience, so specialists continue working on the basis of their scientific heritage. Discoveries belong to you…

Each century brings its own discovery. I would be very glad to see some of you creating new energy resources, which would replace rocket engines in the 21st century. The engines developed in the 20th century are still good, but we really need new energy sources. So, it would be wonderful if some of you here made this outstanding discovery.

I support international school, and international cooperation in space in general. I believe that grand projects, such as development and operation of the International Space Station, are unfeasible if carried out by one state only. Especially, it is valid for human spaceflight programs. I think that docking, ECLS, crew rescue systems shall be identical in all the stations and vehicles, so the countries dealing with human space missions could help one another in orbit or in the interplanetary space to save any crew. This idea has been practically realized in the ISS, so the states can support each other and resque the crew of any country, Anatoly Perminov said.

Roscosmos Head wished the students good luck and success in their scientific activities for the sake of space business evolution. 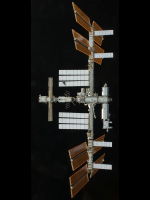