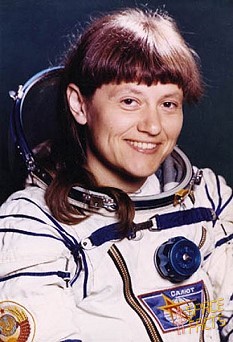 25 year ago, on July 25, 1984, Svetlana Savitskaya became the first woman to walk in space. Along with fellow cosmonaut, Vladimir Dzhanibekov, conducted experiments on the Salyut 7 space station. The walk lasted 3.35 hours and was part of the Soyuz T-12 mission, Savitskaya`s last. Igor Petrovich Volk rounded out this 3 person crew.

After returning to Earth on July 29, 1984, Savitskaya was slated to command an all female Soyuz crew to the space station in commeration of National Women`s Day. The mission was later cancelled. Savitskaya was appointed Chief Designer at Energia (1987) and became a member of the Duma in 1989.

Savitskaya officially left the Russian space program in 1993 after clocking 19.71 hours in space.

Svetlana Savitskaya was born on August 8, 1948, in Moscow. She was interested in flight from a very young age. As a school girl, she managed, for a time, to hide from her father her parachute jumping activities. Savitskaya applied to pilot school at age 16 and was turned down. By the time she was 17, she had logged 450 jumps. At the age of 17, Savitskaya performed a jump from 14,252 meters, falling 14 km before opening her chute at roughly 500 meters. At the time, this feat set a new record. She was, eventually, accepted into the Soviet cosmonaut program on July 30, 1980.

Flying and adventure were in young Svetlana`s blood. Her father, Yeveniy Savitsky, was a WWII flying ace, had served as Deputy Commander of the Soviet Air Defense and was designated, twice, as a Hero of the Soviet Union. At age 18, Svetlana entered the Moscow Aviation Institute, a state-of-the-art engineering school. In 1970, she attracted international attention as a World Champion member of the Soviet National Aerobatics Team.

After graduation in 1972, Svetlana pursued a career as a pilot. She set world records in supersonic and turbo-prop aircraft. Svetlana set the record as the first female to fly 2,683 km/hr in a MiG-21. By 1972, she was licensed to fly an amazing 20 different types of aircraft.

When Svetlana became a cosmonaut, in 1980, she was the 53rd to be associated with Energia. On August 19, 1982, she was the second woman to travel in space during the Soyuz T-7 mission. 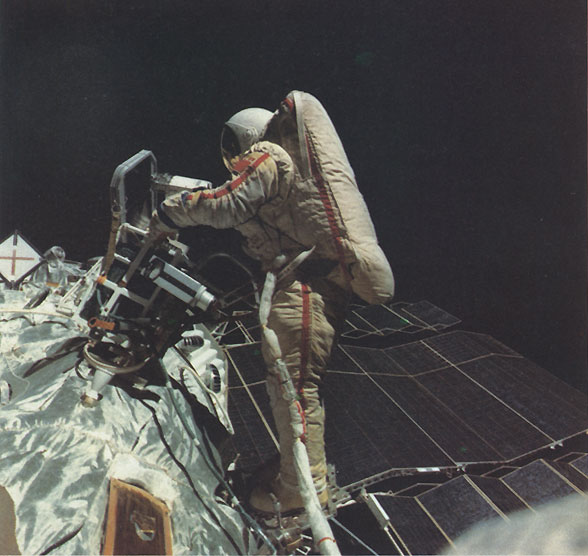 Sexual Discrimination in Space (Russia Today)
Twenty-five years ago Russian cosmonaut Svetlana Savitskaya became the second woman to travel into orbit, the first also Russian, but she was the first woman to walk in space.

Svetlana was 36 when she was thrust into the Cold War space race. While in orbit she undertook hours of experiments and, in doing so, broke new ground for women to join the front line of space exploration.

“Americans were preparing to send women into space. I was called to our Ministry. The question was – what about us? Would we able to do it? Was there enough time? I said then, `why not?`” remembers Svetlana Savitskaya. “We had to keep our priority positions where possible.”

Progress vs. prejudice
It is true the standing of the whole country was at stake, but Svetlana says her mission was tough for other reasons, as she also was the first to fight against sex discrimination.

“Even among our space-colleagues there were men wondering why we needed to weld and said that we might burn each other`s space suits or the spaceship`s exterior. It is a great responsibility,” Savitskaya said. “If I listen to their concerns, then people could have said that surely it was not something women should do. But after my spaceflight, everyone had to shut up.”

Decades on from Savitskaya`s revolutionary flight, the actions of a woman in space are in the spotlight for very different reasons.

Last year, a female American astronaut Heidemarie Stefanyshyn-Piper lost her tool bag on a spacewalk at the International Space Station.

“There was a split second when I did see it floating away and I started to judge how far away it was and thinking `Well can I reach and get it?`” said Heidemarie Stefanyshyn-Piper later during a video connection with Mission Control Center-Houston. “And then I thought no, that would probably just make things worse, and the best thing to do would be to just let it go.”

Svetlana Savitskaya says it did not exactly help the cause of women in space.

“Well, they should be thankful that it was just a closed bag. It could have been worse if she scattered instruments!” laughed Savitskaya. “But, of course, we would consider it as a disadvantage and a work-performance defect. It`s just not professional – no matter the sex.”

And while women in space will always face more scrutiny than men, the fact that women can continue to travel into the stars can be owed to Svetlana Savitskaya`s legacy.