Apollo-Saturn mission 501, now officially Apollo 4 - the first all-up test of the three-stage Saturn V - was on its way. On its top rested spacecraft 017, a Block I model with many Block II features, such as an improved heatshield and a new hatch. The aim of the mission, in addition to testing the structural integrity and compatibility of the spacecraft-launch vehicle combination, was to boost the command and service modules into an elliptical orbit and then power-dive the command module (in an area over Hawaii) into the atmosphere as though it were returning from the moon to the earth. Apollo 4 also carried a mockup of the lunar module. 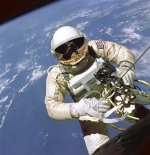