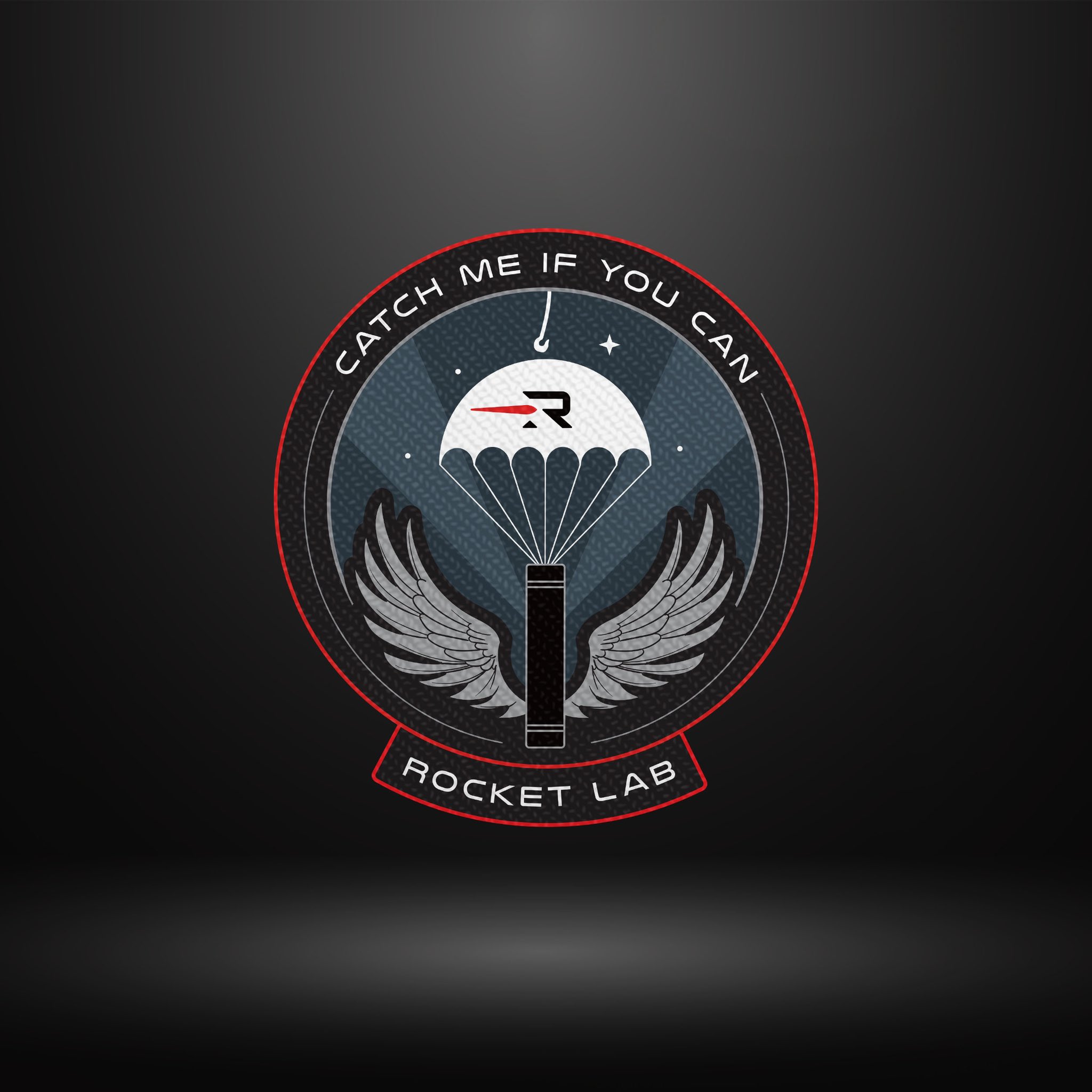 LONG BEACH, Calif.--(BUSINESS WIRE)-- Rocket Lab USA, Inc. (Nasdaq: RKLB) (“Rocket Lab” or “the Company”), a leading launch and space systems company, today confirmed that it will attempt to catch an Electron rocket with a helicopter as it returns to Earth from space during the Company’s next launch.

Rocket Lab’s 32nd Electron launch, the “Catch Me If You Can” mission, is scheduled to launch from Pad B at Rocket Lab Launch Complex 1 during a launch window opening on November 04, UTC. Electron will carry a science research satellite by space systems provider OHB Sweden for the Swedish National Space Agency (SNSA). The Mesospheric Airglow/Aerosol Tomography and Spectroscopy (MATS) satellite is the basis for the SNSA’s science mission to investigate atmospheric waves and better understand how the upper layer of Earth’s atmosphere interacts with wind and weather patterns closer to the ground. MATS was originally due to fly on a Russian launch service before the mission was manifested on Rocket Lab’s Electron.

“Catch Me If You Can” will see Rocket Lab attempt to capture the rocket’s first stage mid-air with a helicopter as it returns from space. Using a modified Sikorsky S-92 helicopter to catch and secure the rocket by its parachute line, Rocket Lab will bring the captured stage back to its Auckland Production Complex to be processed and assessed by engineers and technicians for possible re-use.

This Electron recovery effort follows the catch of an Electron first stage during Rocket Lab’s first helicopter recovery attempt on the “There And Back Again” launch in May, and the recovery attempt for this mission will follow the same concept of operations as the previous launch.

Rocket Lab CEO and founder, Peter Beck, says: “Our first helicopter catch only a few months ago proved we can do what we set out to do with Electron, and we’re eager to get the helicopter back out there and advance our rocket reusability even further by bringing back a dry stage for the first time.”

“Catch Me If You Can” launch details:

Shortly before lift-off, the customized Sikorsky S-92 recovery helicopter will deploy to the capture zone at sea, approximately 160 nautical miles off New Zealand’s Banks Peninsula.
Once launched, Electron’s first and second stages will separate at approximately T+2:32 minutes into the mission. The MATS payload will continue to orbit onboard the rocket’s second stage while Electron’s first stage descends back to Earth. At this point in the mission, Electron’s return is expected to reach speeds of up to 8,300km (5,150 miles) per hour and temperatures of up to 2,400 degrees C (4,352 F).
At approximately T+7:20 minutes after lift-off, Electron’s first parachute will deploy followed shortly after by the rocket’s main parachute. The double deployment of parachutes helps to slow the returning first stage to 0.4% of its top speed during descent: from 8,300km per hour to just 36km per hour.
As Electron enters the capture zone, Rocket Lab’s recovery helicopter will match the rocket’s speed and descent from above, attempt to secure the trailing parachute engagement line to the helicopter via a hook at the end of a long line.
Once captured and secured, Electron will be transported back to Rocket Lab’s Auckland Production Complex. There, technicians will receive and prepare the stage for inspection to assess its suitability for re-use.
+ Images & Video Content 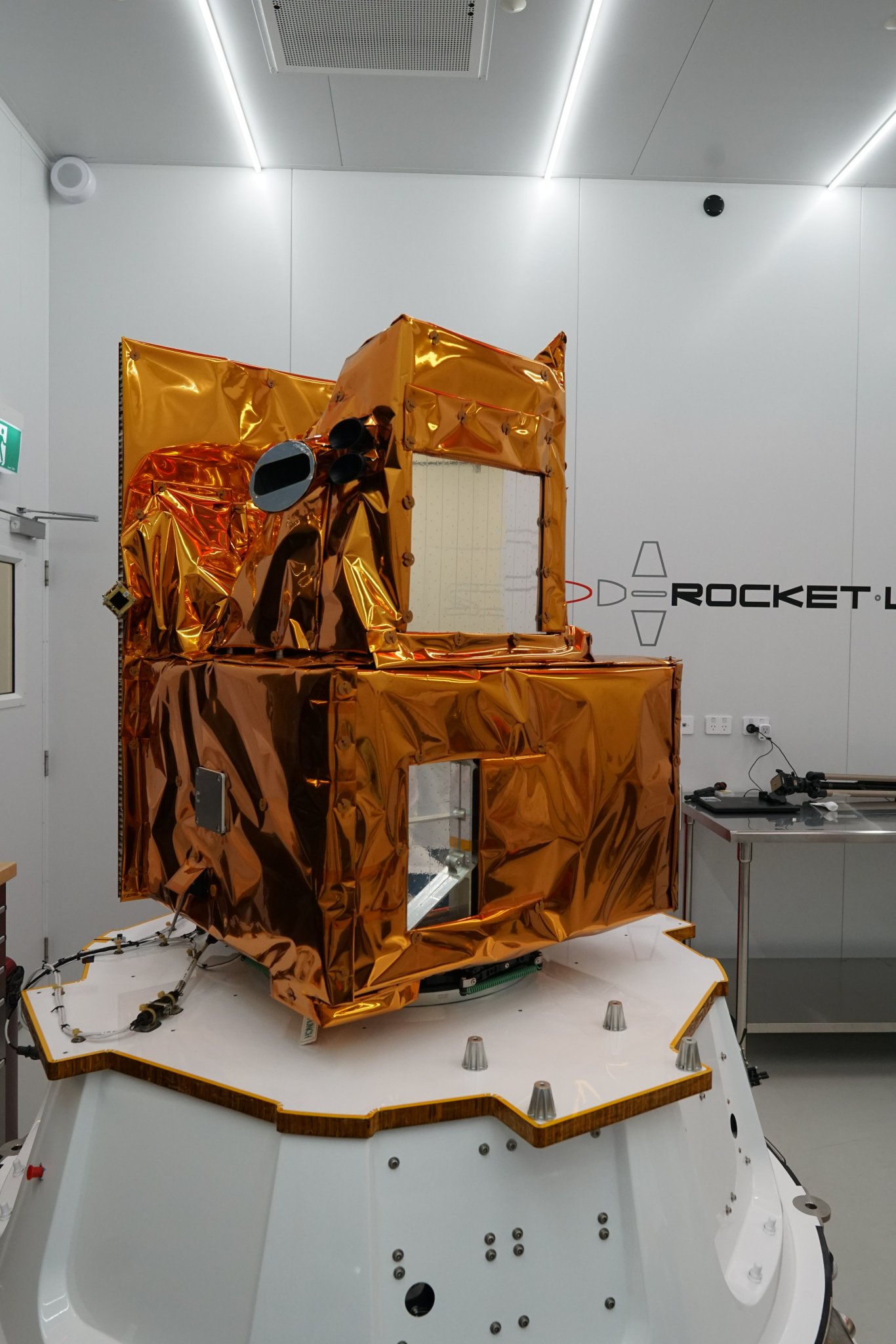 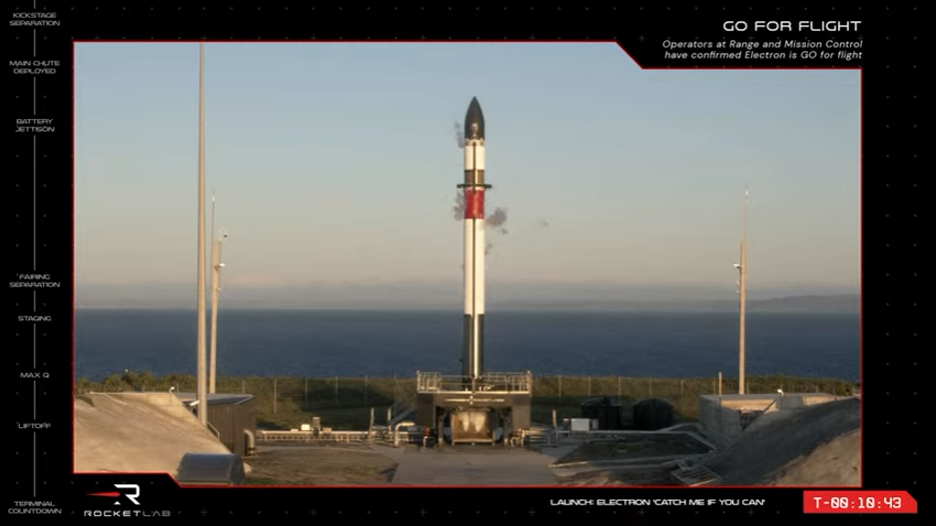 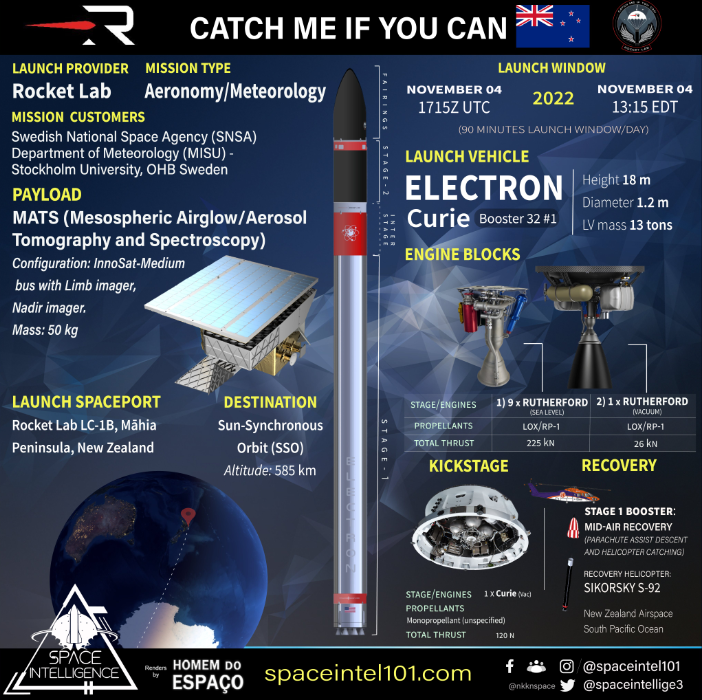 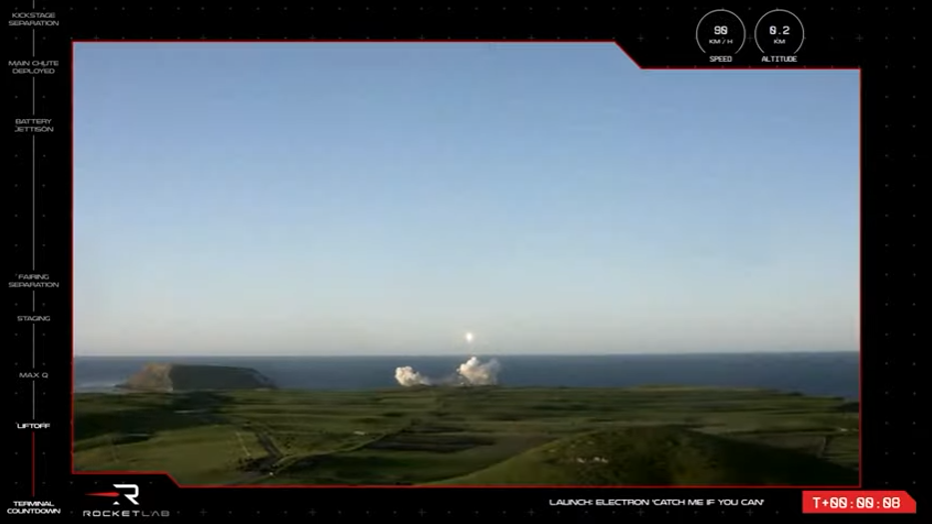 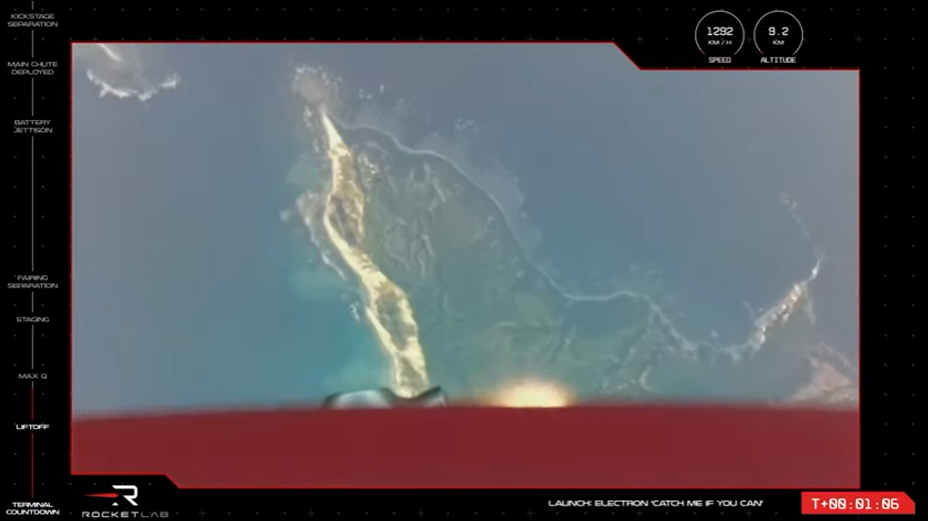 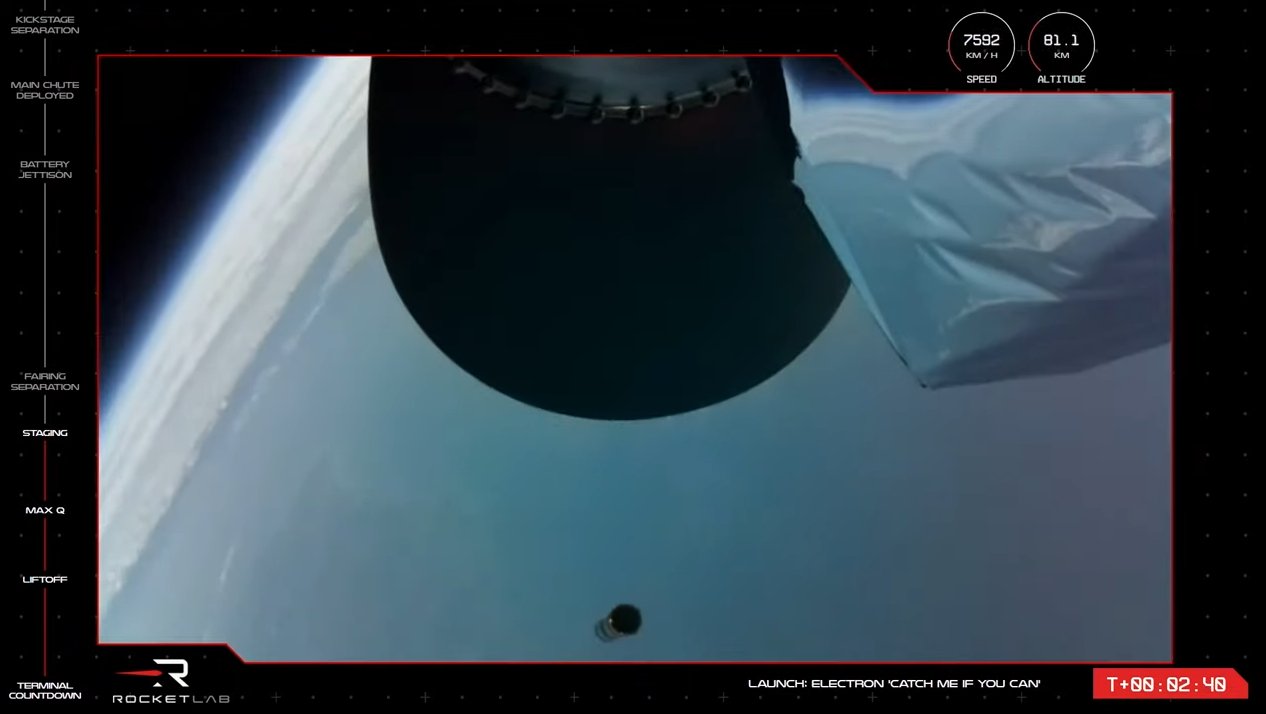 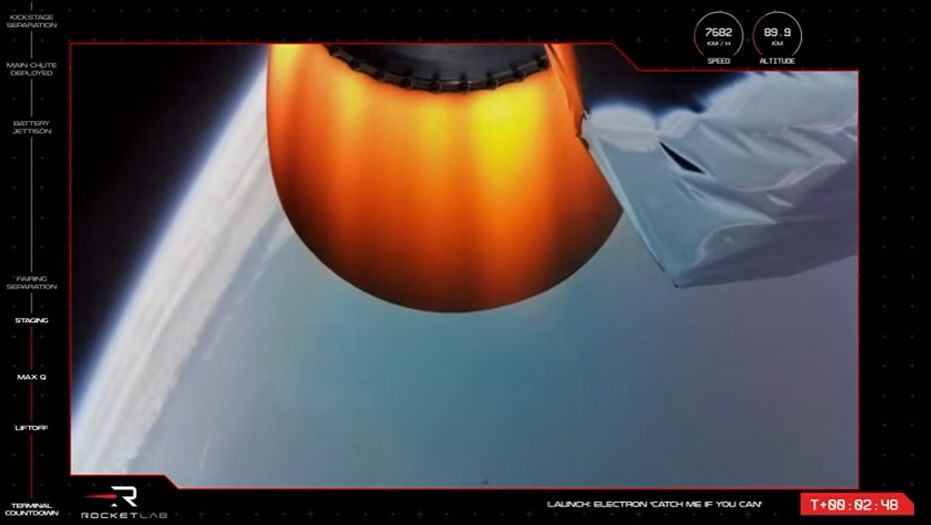 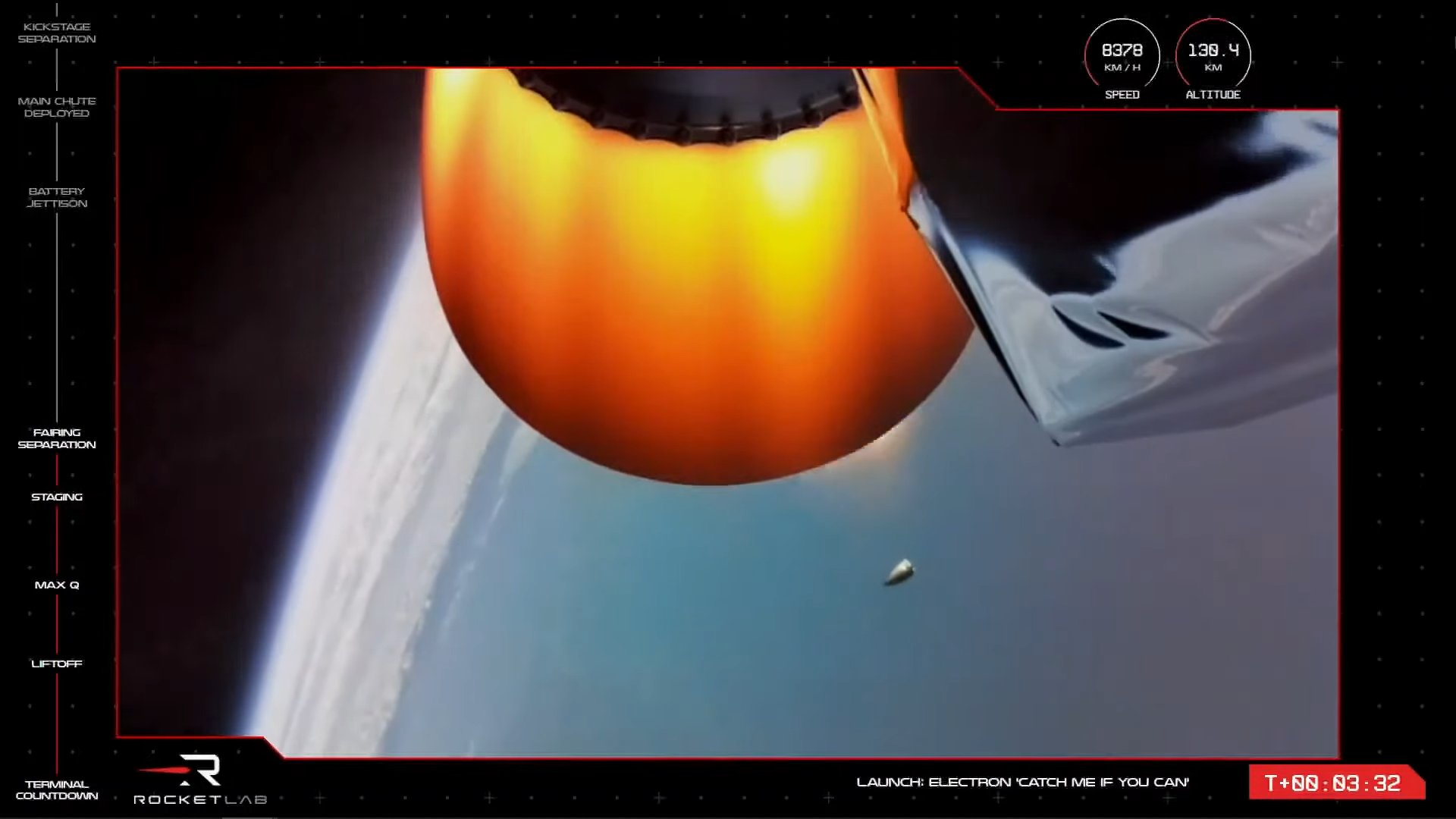 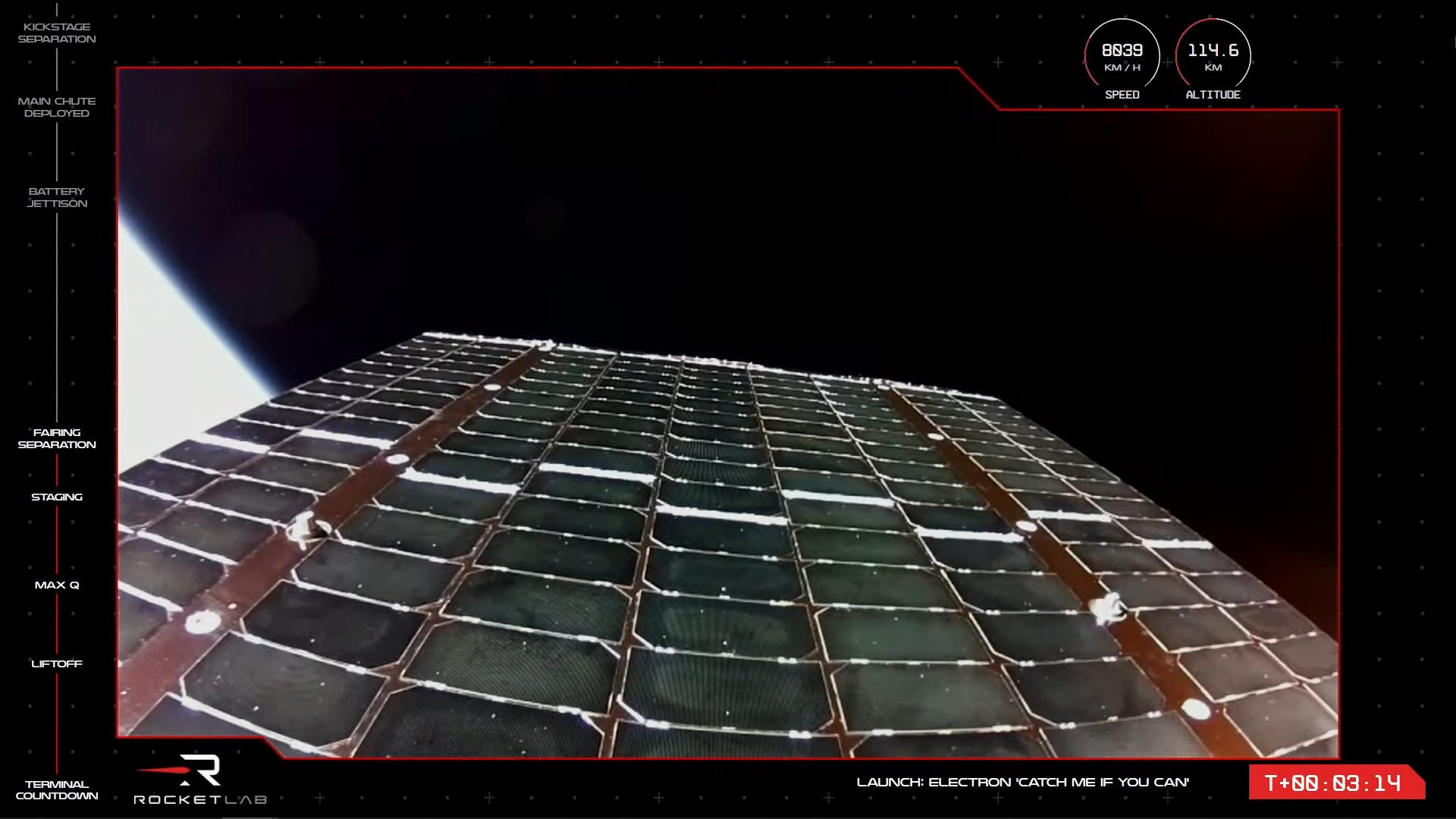 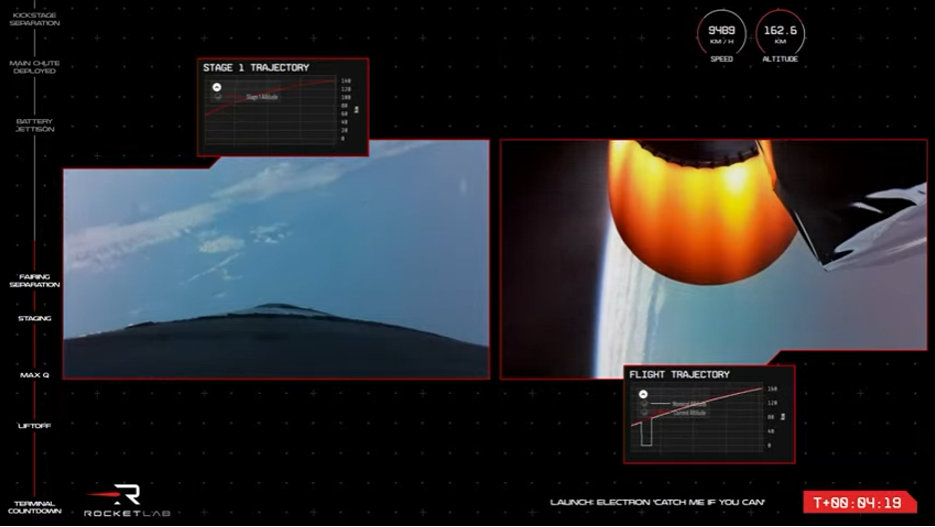 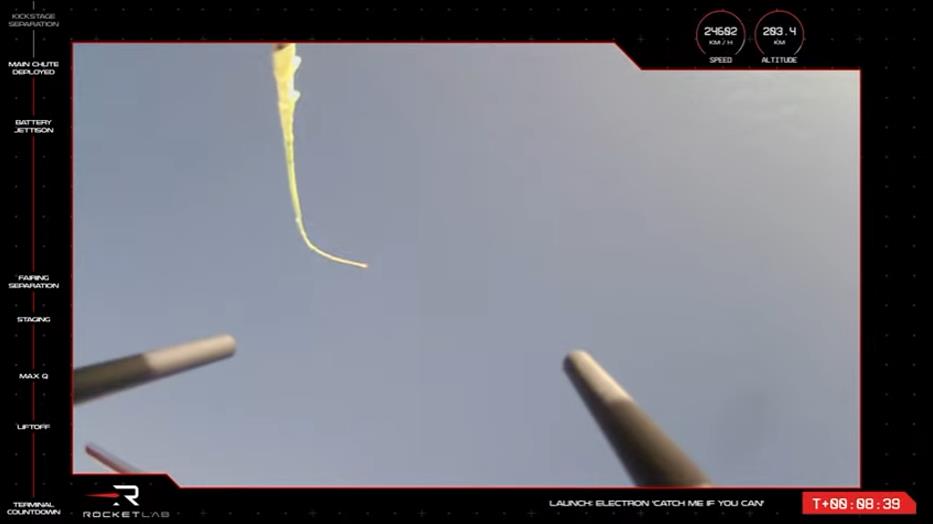 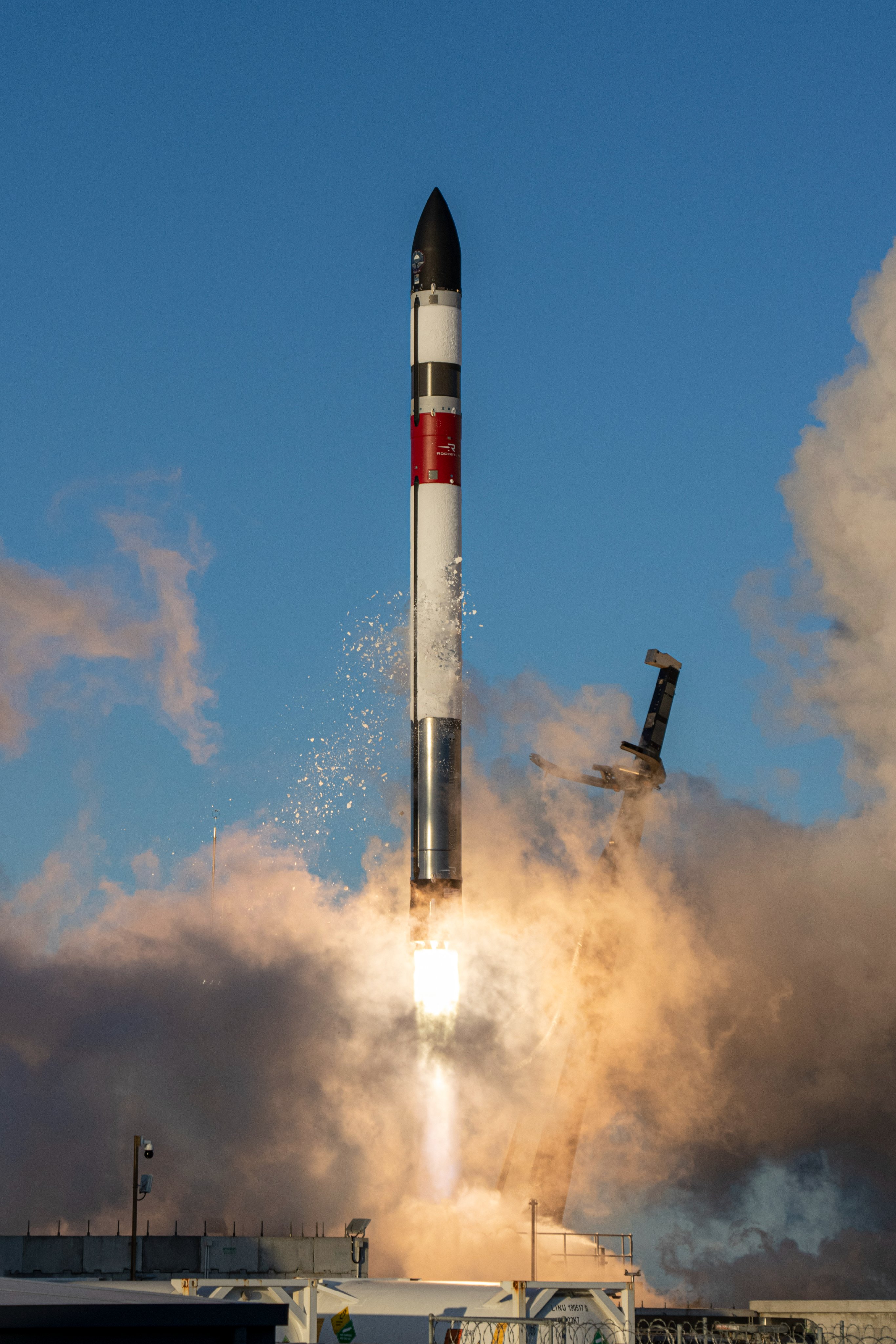