ESA Bulletin (No. 133, February 2008) [GOCE: Obtaining a Portrait of Earth's Most Intimate Features]

30.07.2008
GOCE, a European spacecraft, was shipped together
with some of its ground support equipment from Amsterdam, the
Netherlands to the city of Arkhangelsk in Northern Rus-sia by an
Antotnov-124-100 aircraft (operated by the Volga/Dnieper Airlines)
yesterday July 29 at about 9 p.m. local time.
Customs clearances
have been completed by this morning and now the SC/GSE shipping
con-tainers are being processed for transporting by train to the
Plesetsk launch base.
The cargo was escorted by four employees from
ESA (the SC customer) and five personnel from Thales Alenia, the
Italian prime contractor.
The shipping containers are to be
delivered to the Cosmodrome tomorrow, July 31. Here, in an
Integration-and-Test Facility’s clean room the European team will start
processing the spacecraft for a launch by a Rockot launch vehicle.
The rest of the GSE is on its way by sea from the Netherlands to Arkhangelsk to reach the IFT on August 4.
GOCE’s
arrival triggers an intensive launch campaign at Plesetsk. The
Rockot/Breeze M/GOCE Integrated Launch Vehicle (ILV) is scheduled to
lift off on September 10. The launch services were contracted by
Eurockot Launch Services GmbH and launch will be carried out by the
Rus-sian Space Force’s teams.
The launch campaign team for the
Khrunichev Space Center, the Rockot/Breeze M designer and manufacturer
has already started processing the Breeze M Upper Stage.
Rockot is
built around the booster of RS 18. RS 18 was outfitted with Breeze M
to convert this military ICBM to a light-lift space launcher.
The
Khrunichev State Research and Production Space Center, the largest
company in the Rus-sian space industry, manufactures light- or
heavy-lift launchers, upper stages for launch vehicles,
communications-supporting as well as Earth observation satellites,
booster jet engines, small airplanes, high-quality equipment for the
gas/oil industry, and therapeutic pressure chambers.
Eurockot is a
joint venture set up by the Khrunichev Space Center holding 49 % and
EADS As-trium, a European company holding 51 % interest. Marketing the
Rockot launch vehicle in the world market, Eurockot have launched 7
Rockot vehicles since 2000. These missions have orbited 16 spacecraft
for space agencies or companies from America, Europe or Asia. 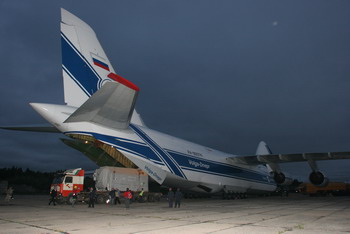