__________
On January 29, 2009, Aleksei Krasnov, the head of manned space flight at Roskosmos, confirmed that a second government tender for the development of the next-generation spacecraft would be initiated in 2009.

Re-thinking the rocket landing: back to parachutes

At the beginning of 2009, various unofficial reports said that previous Russian proposals for the next-generation spacecraft went through further engineering evolution. First of all, a concept of using exclusively rocket engines for the landing apparently drew its share of criticism and an 80-kilogram parachute assembly was re-introduced. It seems that initially the parachute was seen as a backup system only, in case of the landing engine failure; however, later it became a part of the nominal landing sequence along with rocket engines. Solid-propellant braking engines would fire at the altitude of one kilometer above the Earth surface, and the parachute system would be deployed 700 meters above ground. The section of the reentry capsule containing soft-landing engines would be jettisoned prior to touchdown.

As of February 2009, the landing exclusively under rocket power still remained on the table as an option, however it became less favored than a combination of the rocket engines and parachutes, industry insiders said.

Subject of the contract:
Creation of the prospective new generation space manned transport system for a technical of the orbital manned stations, prospective manned space complexes and other objects of near-earth orbital group (The preliminary design).

3.4. The performance of requirements to designly-technical characteristics PPTS.
3.4.1. PPTS must cut in the flown ship of novel generation and developed to gv it base of modification.
The base modification of flown ship is appointed for delivery 6 able-bodied man /person of crew and payload not less 500 kg gv orbital flown stations (OPS) and the recoveries of crew and payload not less 500 kg to earth.
The modifications of flown ship are appointed :
* For the delivery of crew by the crew size 4 able-bodied man /person and payload not less 100 kg gv circumlunar orbit, circumlunar orbital station and the recoveries of them to earth ;
* For experimentation and experimentation in autonomous manned mission by crew size till 4 able-bodied man /person (is fixed by terminal missions) by duration not less of 30 twenty four hours and it recovery ;
* For the transport-maintenance of низкоорбитальных automatic space crafts (KA), of platforms and autonomous moduluses, as well as in ensuring of convening of operations to removal from orbit faulted automatic KA and the major fragments of cosmic waste ,
* For rendering of commercial service in the context of cosmic tourism, for the delivery of stores not less 2000 kg gv OPS and the recoveries of stores not less 500 kg to earth in pilotless грузовозвращающей modification.
3.4.2. The elements of orbit of the flight of the ship of base modification :
* The inclination of the orbital plane of flight _ 51.6 hail in flight to MICROSECONDS and 51.8 hail. In flight to OPS ;
* In delivery and the recovery of the crews of orbital stations _ 200 _ 500 km ;
* To study the fire hazard of the flight of the base modification of ship for the performance of terminal missions gv orbit with inclination planes - 73.2 hail.
3.4.3. The ship onboard system must implement of all fly operations by common cosmonaut with the workspace. In ship should be of two равнозначных workspace contributing operation ship.
3.4.4. Flight conditions for the crew of flown ship and it modifications must correspond requirements STATE STANDARD Live environment of cosmonaut in flown space craft. General medico-performance specification. Maneuvers, in operation gv crew, should be to about quatity :
* At stage of breeding to about conventional program _ not above 4.0 ед ;
* On-site conventional reentry in atmosphere _ not above 3.0 ед ;
* In reentry with peak cross range _ not above 5.0 ед ;
* In the mechanization of off-nominal situations _ not above 7.0 ед. (In breakaway from auxiliary RN in work SAS) and 12.0 ед. (Gv the weather effect part of reentry since last overhaul the completion of emergency rescue system).
3.4.5. The fire hazard of making of safe landing in emergency reentry and the incidents of on-site breeding of the returned interphone control box (VA) at any time of year gv the not prepared site of land and gv distilled water.
3.4.6. The duration of autonomous flight :
* The base modification of flown ship and pilotless грузовозвращающей modification in servicing circumtellurian OPS _ not less of 5 twenty four hours ;
* Flown ships in servicing of automatic space crafts and platforms, in check-off to about breakaway from the orbit of faulted space crafts and the fragments of cosmic waste, the performance of terminal missions to about experimentation of and experimentation with спецаппаратурой, to developing of the technologies of strategic cosmic monitoring and cautions about large-scale emergency power situations of native and техногенного character, the decisions of missions double-track and militari-applied purpose not less of 30 twenty four hours ;
* In the utilization of the modification of flown ship for lunar operation with exit gv circumlunar orbit _ not less of 14 twenty four hours.
3.4.7. The hold-up time of ships PPTS in the composition of flown stations :
* In composition circumtellurian OPS _ not less of 1 year ;

* In composition circumlunar OPS _ not less of 200 twenty four hours.
3.4.8. The stockage of the characteristic velocity of ships in check-off transport-maintenance must implement of dynamic operations, marriage, перестыковку and standby marriage with OPS, низкоорбитальными by automatic space crafts, platforms and autonomous moduluses, the performance of dynamic operations to reentry and ingress VA in the target area of surface of the earth.
3.4.9. Test flight OPS serviced KA, of orbital platforms and moduluses, equipped by corresponding technical devices, and marriage with selected control port must be contributed in the automatic and manual engine power /thrust/ set of operation.
3.4.10. The precision of the ingress of returned interphone control box in conventional regime _ not worse 10 km for ensuring of ingress gv the area of Russia. Should be considered the various controls versions of ensuring of the given accuracy of ingress.
3.4.11. The flown ships of all modifications must contribute the rescue of crew gv all part of breeding, in water landing, the survival of crew till the arrival of the meanses researchly of-спасательного complex.
3.4.12. The level of dynamic loads in convening of dockings should not exceed strength properties and carrying capacity OPS, automatic KA, of orbital moduluses and the elements of their structures.
3.4.13. In the propulsion systems of man-manageable system, usable gv the weather effect part of flight, must be applied ecologically non-hazardous propellant components.
3.4.14. The ship original mass must let it breeding gv low datum orbit with inclination 51.8 hail. By rocket the-launcher of the middle class of higher lifting capacity (lifting capacity not less 20 т gv Nkr=200 km.).
3.4.15. The duration of the operation OF VA in case it manifold use _ not less 15 years old, the magnification degree /ratio of application _ till 10 flights.
3.4.16. The duration of the cycle of the preparation of ships PPTS to launching from the moment of delivery gv cosmodrome _ not above 30 twenty four hours.
3.4.17. Reliability and safety :
* The reliability of the program execution of the flight of ship in earth orbital flight or servicing of circumtellurian orbital station must compose not less 0.99 ;
* The mid-air collision poten of the safety of crew in earth orbital flight or servicing of circumtellurian orbital station must compose not less 0.995 ;
* In the process the operation of elements PPTS must be contributed the safety of ground personnel and cosmic infrastructure ;
* Resonant members, devices of and the onboard system of elements PPTS should be designed with allowance for stability requirement to two failures :
- In common failure flight programs is implement ;
- In two failures the crew rescue is contributed.

3.4.7. The hold-up time of ships PPTS in the composition of flown stations :
* In composition circumtellurian OPS _ not less of 1 year ;

* In composition circumlunar OPS _ not less of 200 twenty four hours.

Novel ship will be safely safeguarded from cosmic waste

Today in Federal cosmic agency began the review of requisitions gv competition to about building up the long-term flown transportation system of novel generation. In competition receive involvement guiding organizations of domestic cosmic industry - RKK "Energy" by him. Queen, GKNPTS them. Khrunicheva, GRTS them. Makeeva, TSSKB them. Gantry. In conformity with air legislation, till the section of covers with competitional requisitions it is impossible was to disclose the details of offers. And here is today, final, appeared
Fire hazard this to make.
Since last overhaul the disclosure of requirements to about engineering research PKK (initially emplaced gv official сайте Roskosmosa), after known that novel spacecraft gv 6 able-bodied man /person of crew should be intended for breeding rocket the-launcher of the middle class of higher lifting capacity, not less 20 т. It is however, the world experience of engineering research and the operation OF PKK capsular type (Union, Apollon, Jemini and пр.) Reads that mass of orbital ship with crew gv 6 able-bodied man /person with allowance for application of up to date materials and equipments must compose on the order of 11-14 т. Such explicit discrepancy called the surprise of specialists in rocket-and-space technology, not familiar with the parts of projects.
As already was known, offer RKK "Energy" is based on the classic modular concept of plotting /construction PKK with ejection seat separation gv reusable descent vehicle and disposable instrument-aggregative section. It is doubtless, the necessity of the manifold use of descent vehicle will lead to some rise of it mass, but till finite timing did not was not known - for account what mass PKK gained in unharmed 1.5 time?
In recent years was sharpened the weight/size problem of cosmic waste, became more frequent the cases of collision - the widely known case of the collision of satellites Iridium-15 and Outer space-2251, initially China was performed satellite interception "Feniun" with the generation of the big number of splinters, also lately one of the satellites of series Express faced splinter and failed. The totality of only observable entities attendent to "waste", exceeds 10000. Whereat from novel PKK is needed the ability of the performance of высокоорбитальных flights and convening of operations to removal from orbit faulted automatic KA and the major fragments of cosmic waste which erectly is pointed in circumstances of the competition. In convening of such operations the danger of collision even more grows.
In these circumstances designers RKK "Energy" was adopted decision about the protection of the flown transport ship of novel generation casing with the elements of restricting. The total mass of plate armors will compose about 6.5 т, and the mass of all ship 19 т in base orbital modification. Armor will be decked the lateral surface of descent vehicle and the most significant assemblies of aggregative section.
In the targets of the conservation of air of the mass of plate it is assumed to manufacture from слойного material TO PAS-1 gv the base of alloy ABT-102 which is applied gv the combat vehicles of infantry BMP-3. Is considered likewise type of operation of heterogeneous titanium alloys from наноупрочнением surface. Such armor to gv ground contributes protection from shards, of pellets and the missiles of little gauge, and in circumstances of the orbital flight - from the particles of cosmic waste and micrometeorites by size till 5 mm which compose the principal share of hazardous objects.
With a view toward the reduction in weight of the weight of descent vehicle in ingress of and the geometrical compression of the necessary parachute system of plate armor will be dropped at stage of atmospheric braking.
To about the declaration of informed source in competitional commission wishing to remain unknown, such offer RKK "Energy" performed the so much forcible impression of gv manufacturers repres GKNPTS by him. Khrunicheva that they acknowledged the apparent superiority of the offer of competitors and arrived at a decision to abandon involvement in competition.
Travels to mark that meanwhile competitional commission дочитала requisition RKK "Energy" only till medium and entirely stochastic that us awaits further
instructions else large enoughly novel and fascinating. 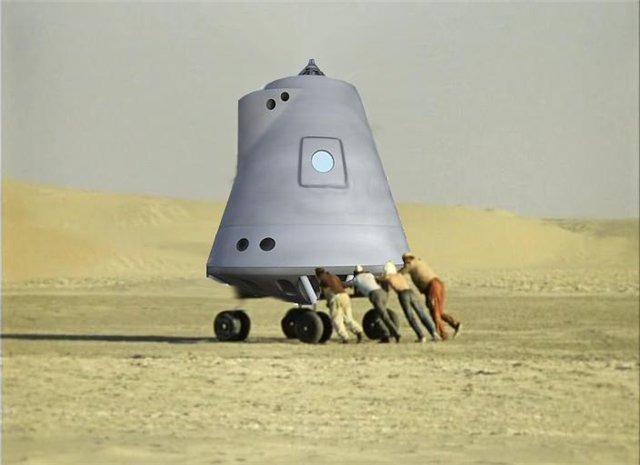