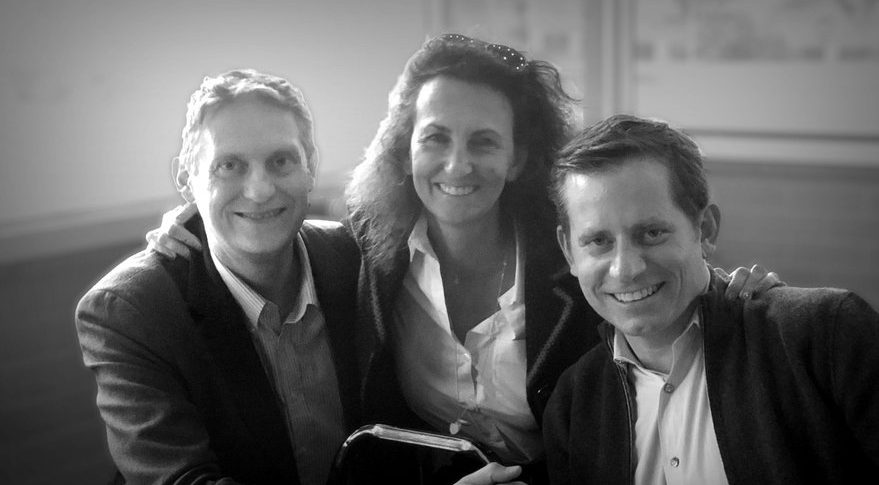 Orbite, a Seattle startup, plans to establish itself as "the social nexus to train and accommodate" future suborbital and orbital space travelers, the company announced July 14, 2020. Orbite is led by Nicolas Gaume, Sophie Stabile and Jason Andrews. Credit: Orbite
SAN FRANCISCO – Orbite Corp., a Seattle startup founded by American entrepreneur Jason Andrews and French entrepreneur Nicolas Gaume, announced plans July 14 to establish a Spaceflight Gateway and Astronaut Training Complex offering luxury accommodations, dining and recreation for commercial astronauts, their friends and families.
“It’s been clear during my two-plus decades in this industry that commercial human spaceflight was going to happen,” Andrew, who founded Andrews Space, Spaceflight and Blacksky before merging the companies under Spaceflight in 2015, said in a statement. “There are now four new human-capable vehicles going into operation this year. The 2020s will be the decade of commercial human spaceflight.”
Andrews and Gaume, a technology and media startup veteran who founded Luxembourg-based Space Cargo Unlimited, are not yet ready to discuss the location of the new spaceflight training complex.
“We still have a lot of work to do,” Gaume told SpaceNews. “Later on, we will disclose the location as well as the architectural team that is supporting us.”
The existence of Orbite, whose name means orbit in French, has been under wraps since Andrews and Gaume established the startup in Seattle in early 2019. Orbite is revealing its existence now, Gaume said, because the firm has its leadership team in place as well as plans to begin offering training in late 2021 and to open a training complex in 2023.
Sophie Stabile, former CEO of Hotels Services of France and Switzerland within the AccorHotels Group, is Orbite’s chief financial officer.
Orbite’s announcement comes on the heels of SpaceX transporting astronauts to the International Space Station in its Crew Dragon. In addition, Virgin Galactic and Blue Origin are preparing to offer commercial suborbital flights. Axiom Space, meanwhile, is developing a commercial module for the International Space Station under a $140 million firm fixed price NASA contract announced earlier this year.
“Obviously, all of the companies will have their own preparation and training programs,” Gaume said. “But we want to create a space that is so unique that it allows you to discover every single aspect of all these opportunities.”
Prior to founding and co-founding technology and media companies, Gaume was exposed to the hospitality industry by his father, a chef in a hotel restaurant in southwestern France. He serves on the board of Groupe Gaume, the family real estate and hospitality business.
“I’ve been exposed from a very young age to the dynamics of creating an amazing experience,” Gaume said.
Orbite will offer customers physical, psychological and skill-set training to ensure they get maximum enjoyment from their spaceflight experience, Gaume said. Orbite also will help “connect the dots” for customers who may start with zero gravity flights, then purchase suborbital rides before traveling to low Earth orbit or further, he added.
Gaume compares the complex Orbite plans to construct to a base camp in the Himalaya Mountains.
“You’re in this critical place where you have all these people with stories and knowledge to share,” Gaume said. “You have a place to practice until you are ready to go into the adventure.”
Orbite plans to establish operations in the United States and Europe, “potentially expanding based on
market opportunities and space transportation operations,” according to the news release.