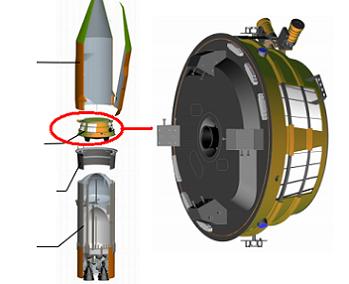 The first launch of a new rocket "Soyuz-2.1V" from Plesetsk in October

The first launch of a new carrier rocket "Soyuz-2.1V" is planned from the Plesetsk cosmodrome in October, according to journalists at the Defense Ministry representative troops Aerospace Defense Colonel Alexei Zolotukhin.

According to him, in the assembly and testing facility conducted autonomous tests of external instrumentation missiles. In parallel to the launch site in preparation ground maintenance equipment launch pad booster for the "dry" removal, scheduled for August 23.

The prototype model rocket "Soyuz-2.1V" was delivered to the Plesetsk Cosmodrome on August 9. Together with the "Union" of SRP "TsSKB Progress" delivered to the Baikonur launch also block "Volga".


In the Research Centre of rocket-space industry in the Moscow region occurred during emergency situations firing a rocket engine tests. Informs "Interfax", citing a source in the local administration.
"During the fire test bench was damaged engine is one of the stages of the launch vehicle" Soyuz ". There were no casualties. The stand is also damaged, "- a source told reporters.
He said that the engine is made ​​in Samara for the rocket "Soyuz".
"The company is working committee that is investigating the circumstances of the incident and assess the damage" - the source added.

So, summing up hints sounded was something like this:
1) After working for about 7-8 seconds, automatic stand found above normal turnover RD0110R TNA.
2) command has been given an AED to be executed that originated in the CBC RD0110R slugging, the deformation of the pipe.
3) The fire and serious injuries stand and missile unit was not, but the design will have to refine
4) Rather, this year launching Soyuz-2.1V will not be, at best, he will fly next year.
5) The Angara-1.1 has a chance to fly first.

Special Commission during the week will provide an opinion on the fact contingency that occurred on August 16 at the Research Center of the rocket and space industry (SIC RCP city Relight) Tests engine for the new Russian carrier rocket "Soyuz-2.1V", RIA Novosti a source in the space industry.
"In the course of routine fire engine test stand at the first stage of the new rocket" Soyuz-2.1V "there was an emergency situation, the development of which it was possible to eliminate the automatic control means of the stand. Everything went without a call urban fire brigades. No explosions, as is rushed to announce a number of media, there was no "- the source said.
He explained that the engine of the first stage as a result of contingency has been damaged, and further fire tests are not suitable.
"The very ground stand damage is not received. You may need to replace multiple cables and pipelines, but it is insignificant economic loss," - said the source RIA Novosti.
According to him, the reasons for the incident will set a special commission for a week.
"That's what the existing tests to detect all possible problems. Just important that they were found still on the ground, not in the rocket carrier" - the source said.
He did not specify whether the emergency situation will lead to the transfer of a test firing of rocket "Soyuz-2.1V" from the Plesetsk cosmodrome.

MOSCOW, Aug. 23 - RIA Novosti. The cause of the accident, which occurred during ground tests of the first stage of the new rocket "Soyuz-2.1V", was the failure of safety systems of the RD-0110, said in an interview with RIA Novosti source in the space industry.

A special commission examines emergency situation occurred on August 16 at the Research Center of the rocket and space industry (SIC RCP city Relight) Tests of the first stage of the new Russian carrier rocket "Soyuz-2.1V."

"As it was established the commission, central (NC-33) and steering (RD-0110) engines of the first stage of the new rocket" Soyuz-2.1V "run on time and went to work on the standard mode of the sequence diagram in ground test bench. However, after a few seconds of work was suddenly formed a team of AED (automatic engine shut off.) As it turned out, this team was false: it showed that allegedly came limits for steering shaft turbopump unit RD-0110, "- said the source.

According to him, the false command to automatically turn off engines was issued because they were inaccurate set parameters for its formation.

"To the central engine NK-33 so far no complaints. But in the logic of the emergency protection system steering engine RD-0110 identified errors. Rather, the test bed system worked, but the flight of the product - not. But I would not say that this operator error or programmer. If it were only that, the engine would just shut down cleanly, quickly and without any damage, "- said the official.

According to him, an emergency situation has developed because the safety system of the RD-0110 is not implemented in time to full-time sequence diagram for an emergency stop.

"Therefore, the engine will continue to work hard in the abnormal mode, which as a result has led to its destruction, and partial damage of the first stage and its cable systems to the test stand. However, sprinklers stand worked normally, so it almost hurt," - said the source.

Responding to a question that will be taken to prevent future recurrence of abnormal situations, the agency said: "It is necessary to adjust the logic of the safety system of the RD-0110. Way, to find out that there are errors in it, it was possible it was during the this contingency.'s good, because that defects will be considered in the modernization of the system of protection. tests that exist in order to identify any potential issues still on the ground, not in the actual flight of the launch vehicle. "

Roskosmos head Vladimir Popovkin, in mid-July, told reporters that the first launch of the new Russian carrier rocket "Soyuz-2.1V" can be implemented in the fourth quarter of 2012.

Earlier by the Defense Ministry to the troops Aerospace Defense (VVKO) Colonel Alexei Zolotukhin RIA Novosti that VVKO begin flight testing rocket light class "Soyuz-2.1V" at the end of this year and completed them in 2014. In total for flight tests requires five starts.

SIC RCP is the parent company of Roscosmos to design and create test tools in experimental testing of missile defense and space applications. He specializes in the bench test of liquid rocket engines and rocket stages, thermal vacuum testing of space vehicles.

Ten days after the failed test, industry sources reported that a new test schedule signed in the wake of the accident had called for the second attempt to test the core stage of the Soyuz-2-1v rocket in February 2013. Observers considered such a timeline too optimistic and predicted that no key organization involved in the project would sign a permission to proceed with the maiden flight of the rocket before the successful static firing of its core stage.

no key organization involved in the project would sign a permission to proceed with the maiden flight of the rocket before the successful static firing of its core stage.

Observers considered such a timeline too optimistic

September 4 at the cosmodrome "Plesetsk" in the flight tests took place on the export of a new launch vehicle modification "Soyuz-2.1V" to the launch complex (SC).
The so-called "dry" export - one of the most important stages of prelaunch, involves a comprehensive check of all systems and LV and SK-launch testing of all operations except fuel.
Transport RN at LC started at 07.00 GMT. Currently, "Soyuz-2.1V" with cargo weight layout installed in a vertical position in the starter and starter launch complex calculations started operations of the first launch day: docking pnevmokommunikatsy package, assembly diagrams thermostat, docking gas communications, etc. Work on launch complex will last 4 days, after which the rocket is released from the launch pad and returned to the assembly and test building for the analysis of its availability, as well as launch pad and starting calculations for subsequent start-up, the press service of Roskosmos.